Two Rheem 18 kW water heaters provide 240 gallons of hot water to all the heads, bars, galley and other onboard services. An 80-ton Dunham-Bush Chiller, with a 60 kW boiler, provides the vessel's HVAC system.

Flying Cloud's speed during sea trials was in excess of 39 knots. The boat showed great stability and ride comfort thanks to its dynamic ride control system.

Noise levels are contained on both passenger decks and on the bridge. The Steamship Authority plans to employ this vessel on the Hyannis Port to Nantucket route. Its service speed of 36 knots will allow a crossing time of less than one hour, significantly less than the traditional design ferries, which take over two hours to cover the same distance.

The vessel is powered by Paxman 12VP185 diesel engines driving Kamewa 71SII water-jets that provide a service speed of 36 knots with a full load of 300 passengers. Passenger accommodation is with aircraft quality seats on two decks with 171 passengers seated in a 3-3-3-3 arrangement on the main deck and 129 seated in a 4-4 configuration with a central lounge area on the upper deck. Exterior seating is also provided on the upper deck to allow passengers the option of open-air travel. The boat has a large bar on the main deck, is ADA friendly and has a four-season HVAC system capable of removing moisture from the air and eliminating window fogging. The pilothouse has 360-degree vision and is equipped with the latest and most up-todate navigational equipment, including a night vision system that allows seeing ahead of the boat in total darkness.

A particularly critical issue for the Woods Hole Steam Ship Authority is the wake wash generated by the vessel when operating in the wash sensitive areas at either end of the route.

Gilbert Associates Inc. to design the vessel, which is already in full and successful operation.

Since ensuring the comfort of the 500 passengers on board was a main concern to both the builders and operators, Horizon's Edge was designed to handle offshore conditions with heavy gaming equipment on board.

The vessel, which has a cruising speed of 15 knots, is powered by two Caterpillar 3508B DIT main engines, each rated 1,100 bhp at 1,800 rpm. An American Bow Thruster "Trac Series" dual propeller 28-in. diameter unit, powered by a 200 hp variable frequency electric motor, enhances maneuverability.

The vessel's pilothouse is stepped above the main deck, and features a small private room below it, half in the hull, and half above the deck. The second deck is an open observation deck to view the many sights on the DC waterfront. The main deck features large windows to enjoy the views from the comfort of the fully air-conditioned dining room.

American Bow Thruster, 80 hp, is electrically powered off a third genset. Controls and motors for the bowthruster were furnished by SCR Engineering.

Nina's Dandy is the fifth dinner cruise vessel designed by DeJong & Lebet delivered in the past year.

The firm currently has two other dinner vessels under construction, and two on the drawing boards.

Kvichak Marine Industries has constructed and delivered Maui Magic, a 54-ft. (16.4 m) all-aluminum catamaran, to Maui Classic Charters (MCC) of Kihei, Hawaii for operation out of Maalaea Harbor in Maui.

After donating the Lavengro, a 1926 schooner, to The Northwest Schooner Society of Seattle, MCC decided to build a new vessel in order to maintain their fleet size. The company chose a catamaran design from Morrelli & Melvin, of San Diego, Calif, and Kvichak Marine as their builder. Maui Magic has a beam of 17 ft. (5.1 m), and is USCG approved for 71 passengers plus a crew of four. Powered by twin Cummins 6CTA diesel engines, driving 28-in. stainless steel propellers through ZF IRM 305A marine gears, Maui Magic will cruise at about 20 knots with a top speed of about 22 knots.

Maui Magic will travel to Molokini Crater and the rugged Maui coastline for snorkeling and sightseeing tours.

The vessel was to be delivered in December 2000. 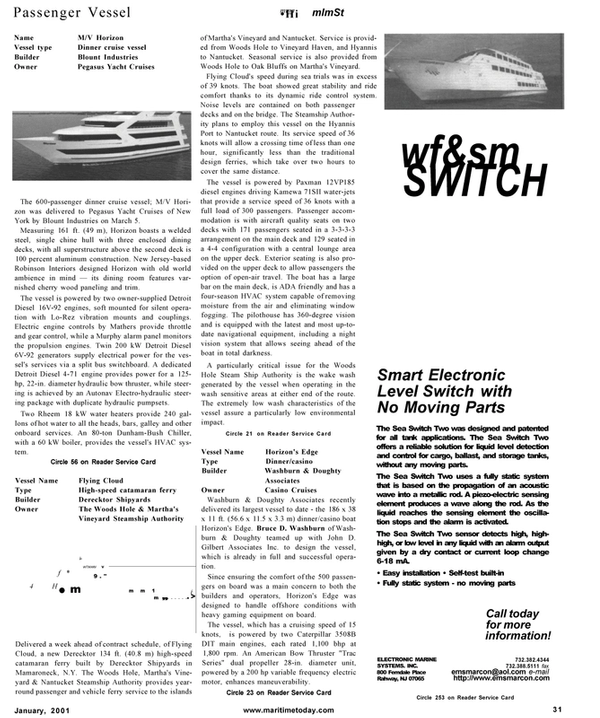