The teaming of Austal Ships and Bender Shipbuilding to construct, from the ground up, a world-class aluminum vessel construction facility in Mobile, Ala., highlights the level of investment mid-tier U.S. yards have made in the past five years.

Austal, which is well regarded for its fast craft design and construction prowess, will have at its disposal arguably one of the finest plate production facilities in the country, as well as access to a market for its signature craft, which is seemingly poised to boom. The two companies, however found that through a melding of similar ideas — both on a philosophical and financial level — that they could assimilate their cultural and business practices to form what aspires to become the largest aluminum shipbuilding company in the U.S. — Austal USA. Currently being constructed in the heart of the Bayou shipbuilding mecca of Mobile, Ala., the new company's main building is nearing completion. Measuring 360 x 90 x 113 ft. (109.7 x 27.4 x 34.4 m), this focal point ofAustal's new venture will have the capabilities of constructing two 164 ft. (50 m) fast catamarans end to end simultaneously or up to one 262ft. (80 m) catamaran car/passenger ferry.

By Regina P. Ciardiello, associate editor It is not everyday that downtown Mobile, Ala. gets a new addition to its skyline. Not only is the new Austal/Bender venture bringing in additional jobs and added revenue to both the city and the State of Alabama, but an added bonus is that the creation of Austal USA has physically become part of the downtown Mobile scene as its main building is prominently featured within the city skyline. Located a stone's throw from Mobile's Convention Center, the gantry cranes that fly atop the new company's main building are visible from miles away.

While this is pleasing to Austal USA from a design standpoint, it has surprisingly been a factor in adding to its workforce.

According to Bill Pfister, Austal USA's vice president, Marketing & Administration, many area residents view this new structure while driving through the downtown area and see it as a possible employment opportunity. If they have the experience that the company is looking for — perhaps they held previous positions in welding or fabrication — then they might have just landed themselves a job — all because they were curious about this new piece of the Mobile skyline.

This is beneficial to both the employees and the shipyard, as it promotes local employment, which in turn will bring Austal USA closer to its goal of 1,000+ workers within five years. A number that Austal Ships group chairman John Rothwell hopes will be achieved sooner than later. It is safe to say that sooner is probably the operative word since the yard, aspires to hold 500 employees by the end of 2002.

The Beginning of a Franchise The story of the Austal Bender alliance begins with the parent company, Austal Ships, venturing to the U.S. in search of a yard with which to establish a partnership. This quest was led by group chairman Rothwell, who saw a market for aluminum ship construction in the U.S. With his headquarters located worlds apart in Western Australia, the company was looking to expand upon its shipbuilding expertise by branching out from its mostly European exports.

While Austal is a leader in fast ferry construction for this market that relies heavily on ferry transport across its seas and channels, the company wanted to grab hold of the U.S. shipbuilding market, but was prohibited from doing so because of the Jones Act.

While Austal Ships has also enjoyed positive relationships in its home state with the construction of patrol and police vessels for the Australian Customs Service and Navy, most recently the three police boats that were constructed this summer for the New South Wales Police Service by subsidiary Image Marine (see MR/EN September 2000), the company wanted to position itself to profit from the lucrative U.S.

defense market. In fact, Rothwell, who spoke with MR/EN from Austal's head office down under, shared that he traveled to Washington, D.C. on a variety of occasions with both Pfister and Tom Bender, Bender Shipbuilding's president to attend workshops at the U.S.

Navy's Carderock Division that dealt with high speed freighters for military use — something that Austal USA hopes to add to its repertoire.

On discussing Bender Shipbuilding as his choice, Rothwell, who established Austal Ships in 1988, spoke of his immense trust and respect for both company president Bender, and Bruce Croushore, the yard's V.P./general counsel as one of the deciding factors in his decision to team up with the yard.

"I talked with many yards in the Southern U.S. and felt that we didn't meld with them," Rothwell said. "When I met Bruce (Croushore) and Tom (Bender), I thought them to be very astute and knowledgeable of their craft as well as financial control — they were honest in a sense that it was 'what you see is what you get'. "We are pleased with our partnership with Bender," he added.

The new U.S. outlet's premiere project is a spec vessel that is scheduled for completion this summer. Currently being constructed at a site that is temporarily being leased by Austal until the main shed is complete at the beginning of 2001, the 82 ft. (25 m) vessel that is able to move at 26-27 knots, will be constructed as a passenger ferry that will house propellers instead of wateqets.

While the vessel is not being built to specific owner requirements, Pfister cited that there is no doubt in his mind that suitable buyer will come forward.

His high confidence level stems from the fact that several would-be owners have come forward expressing interest that they want to add to their fleets.

While the project's main particulars are not set in stone, Pfister did express that the ferry's design, which will be completed by Austal's own designers in Australia, will boast a color scheme of blue, orange and yellow hues. While he wasn't at liberty to discuss specific names of probable buyers, he did mention that one specified that the vessel be equipped with seats manufactured by the Australian- based company named Berteaux. 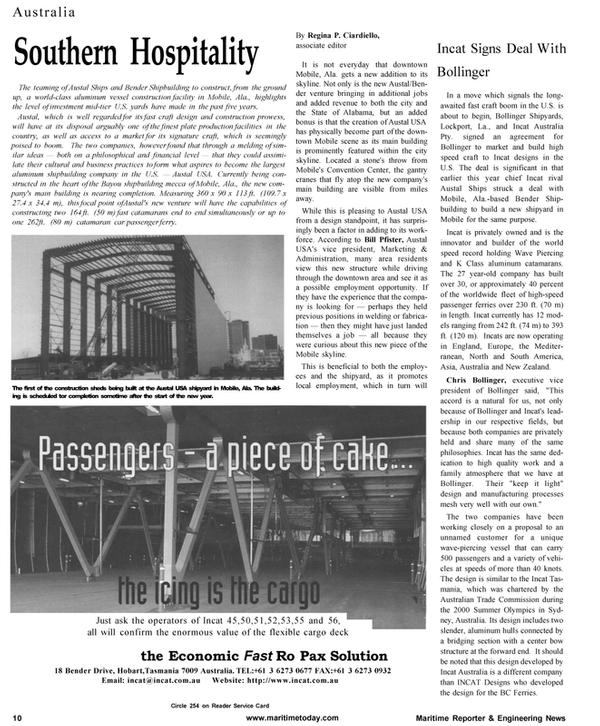