Developments in shipbuilding have been driven by needs to simplify the engineering and manufacturing.

The cause is not just to become more competitive but also to avoid problems in controlling engineering and manufacturing costs. Two recent examples carried out with ShipConstructor include a small 7.5-m aluminum police boat and a 120-m car/truck/pax mono-hull fast ferry. Both vessels have been 3-D modeled using the same ShipConstructor software, which can be scaled to be a price efficient solution for small and large vessels at the same time. The software maintains the same functionality. The reduced cost version is only limited in the maximum number of parts in the project. The smallest configuration is limited to 500 structural parts (the police boat had about 300) at a cost of less than $1,000. The ease of use and rapid modeling enables users to 3-D-model even small boats faster than they can design the same using traditional 2-D drafting, thus enabling small boat builders and large vessel constructors alike to use the very same software tools.

Small Police Boat Recently, ARL participated in the set up of a new aluminum fabrication division at Victoria Ship Yards, Victoria, B.C., Canada. The objective was to use design and manufacturing methods resulting in lower skill requirements in comparison to what is required traditionally.

This involved the introduction of methods to simplify the engineering design process and the production procedures to ensure that there would be no need for rework. The shipyard also introduced precision parts manufacturing and an assembly process resulting in significant productivity gains and a higher quality product. The shipyard has a small, efficient engineering staff. Before this project the engineering design and drafting was carried out using conventional 2-D AutoCAD drafting. The trade personnel involved in this program were sheet metal journeymen, who have a good hand in working with thin gage stainless steel fabrication and with smaller aluminum assemblies, i.e. tanks, railings etc. However, there was no history of aluminum boat building.

It took less than two man weeks to complete the 3-D structural model, and produce all working drawings for some 300 individual parts using ShipConstructor. The full 3-D structural model of the vessel ensured that there would be no part match up problems. We also knew the exact hull weight and got an accurate estimate of the cutting time. All curved plates had been lofted electronically and expanded to flat patterns, then coded to NC machine code.

The parts manufacturing was done with a CNC high speed milling method, where the dimensional accuracy of the parts is in the range of 0.005 inches. Both, metal and none-metal materials have been cut for this project.

None of the parts had any allowance for trimming, even though this particular hull had never been built earlier. All plates were marked to simplify joining parts. ShipConstructor provided exact nesting. All data on the nest plots and in the report is automatically kept up-to-date. Due to the exact fit, the parts can be assembled without the use of jigging. This special method works by beginning with the bottom shell plates being joined at the keel starting from the aft end. While doing so the plates automatically obtain the correct shape.

The entire hull is tacked together, and stitch welding is performed in selected places. The sheet metal crew was familiar with the thermal characteristics of aluminum and with limited guidance was able to assemble three vessels without having to trim any parts or force fit any components. The weld joints were accurate everywhere producing ideal conditions for welding.

Many manufacturers underestimate the costs of correcting mistakes that occur involuntarily during the design and manufacturing process. These costs exceed the cost of taking preventive measures. ShipConstructor, developed by ARL, permits working in a conventional 2-D drafting mode. However this program produces from the working AutoCAD drawings, automatically a 3-D structural model, calculates weight, CG, and provides material estimates and other documentation from a single database. This virtually eliminates human errors and the elimination of rework is evident by experiencing timesavings in excess of 40 percent over the use of conventional shipbuilding methods.

120 m Fast Ferry Project In April 2000 Intersection Design, France started the Rodriquez Cantieri Navali, generating all production drawings, nests and supporting documentation needed for the building of their latest project, the all aluminum, car/truck/pax mono-hull fast ferry TMV115 (see related story on page 29), using ShipConstructor software. The ship is contracted for delivery in April 2001, leaving about 12 months for the development of the detail design, the preparation of the production documentation, and the actual construction of the ship.

The design team was composed of two technical draftsmen with about two years experience in ship production and two fresh technical university graduates, supervised by a project manager. The TMV115 is currently under construction; portions of it being allocated to four separate shipyards, none geographically close to Rodriquez. Some of the blocks will be transported by barge while others will be towed at sea, for final assembly at Rodriquez. Final design and production work started two weeks apart in early April, yet significant changes were requested by the customer as late as May. The last nest and assembly drawings have been delivered to the yard in late September; about 16 months have been invested by the Intersection Design team to supply the full production documentation.

Working in the AutoCAD environment, it was possible for Rodriquez to directly access the Intersection Design network for on-line red-lining of drawings and downloading of final documents. Aluminum work is scheduled for completion by early December 2000, while outfitting has already commenced in September.

The 3-D model of the TMV115 consists of well over 15,000 structural parts, 350 nests and hundreds of stiffener plots and 3-D assembly drawings. 3-D drawings were provided to the shipyard for easier assembly work throughout the project. All along, ShipReport kept track of all drawings and scores of parameters, systematically cross-checking to validate data integrity between the AutoCAD drawings and the database.

In great part thanks to the extensive automation and data validation provided by ShipConstructor, no major errors disturbed the extremely tight production schedule.

For the record, seven minor errors were easily corrected in the yard. Considering the limited experience of the Intersection Design team, it was the consensus that the ShipConstructor software provided the environment for such an outstanding result. The 3-Dmodel makes inspection of the structural assemblies easy and effective by all parties, before nesting, cutting and production. Designed to be operated on a network by a team, the ShipConstructor architecture allows work to take place concurrently on a single area, and the real-time cross-referencing by each operator of the work being carried out by the others. Hence, up-to-date drawings are being used at all times by all users. Both projects utilized the structural and production modules of ShipConstructor. More substantial savings in engineering and production as well as higher quality products can be expected when companies utilize the fully integrated piping module that will become available in March 2001. 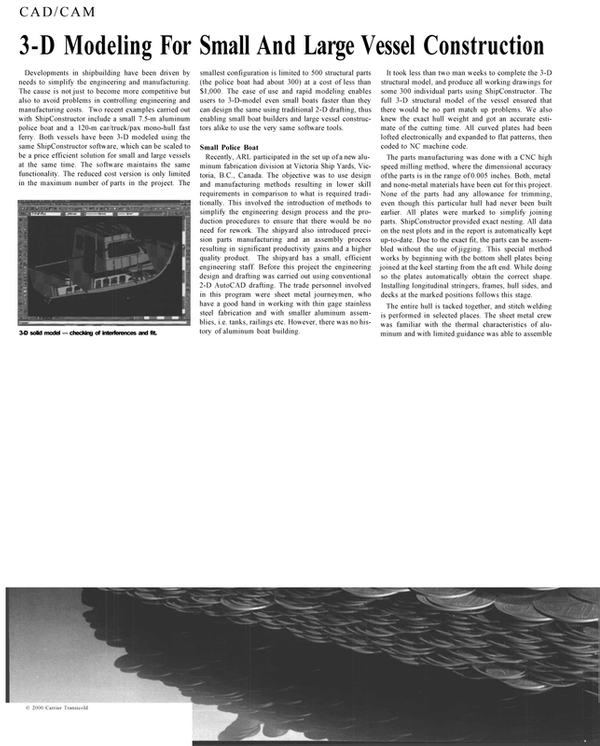