In a move which effectively creates a defense and marine naval construction giant, Northrop Grumman Corp. and Litton Industries jointly announced late last month that they have signed a definitive agreement under which Northrop Grumman will acquire for cash all of the outstanding shares of Litton for $80 per common share and $35 per Series B Preferred share. The transaction is valued at approximately $5.1 billion, which includes the assumption of Litton's $ 1.3 billion in net debt.

Litton is a leading supplier of advanced electronics and information systems to the U.S. government and international customers and is the premier designer and builder of non-nuclear surface combatant ships for U.S. and foreign navies. The company reported sales of $5.6 billion and net income of $218 million for the 2000 fiscal year ended July 31. Litton had $8.2 billion in fully funded backlog at the end of its first quarter, October 31, 2000.

Kent Kresa, Northrop Grumman's chairman, president and chief executive officer said, "We are very pleased with our strategic acquisition of Litton, which we believe brings tremendous value to the shareholders, employees and customers of both companies. With projected combined pro forma revenues of more than $15 billion in 2001, growing to $18 billion by 2003, this acquisition solidly places Northrop Grumman among the world's top-tier defense companies and strengthens our commitment to systems integration, defense electronics and information technology." Mr. Kresa added that, "Litton gives us a new core competency as a major prime contractor and systems integrator of surface ships for the U.S. Navy. Following the close, Northrop Grumman will be one of the country's largest federal IT suppliers and our defense electronics business will heighten our status as a premier systems and sensor integration leader by expanding into navigation and guidance systems for airborne platforms and other military avionics systems. The acquisition also significantly broadens our portfolio of businesses." Grumman's and Litton's boards of directors have unanimously approved the transaction.

Following the close of the transaction, it is Northrop Grumman's intention to raise additional capital through a stock offering.

"I am pleased that we were able to work with Northrop Grumman to create this combination, which brings together two premier advanced technology companies and generates a broad range of opportunities going forward," said Michael R. Brown, Litton's chairman and CEO. "The combination creates outstanding value for Litton and Northrop Grumman shareholders, customers and employees." The transaction, which is expected to close within the first quarter of 2001, is subject to review under the Hart-Scott-Rodino Act as well as other governmental and regulatory agencies. The transaction will be structured as a cash tender offer that will be initiated on January 5, 2001, for all the outstanding stock of Litton.

Northrop Grumman, based in Los Angeles, is a high technology company providing innovative solutions in systems integration, defense electronics and information technology for its U.S. and international military, government and commercial customers, as a prime contractor, principal subcontractor, team member or preferred supplier. The company expects to report sales of approximately $7.6 billion for 2000 and has more than 39,000 employees in three major sectors at sites in 43 states and various international locations.

Litton designs, builds and overhauls surface ships for government and commercial customers worldwide and is a leading provider of defense electronics and information technology services and support to the U.S.

government and international customers. The company also provides specialized IT services to both commercial and government customers at the local, national and international level. Headquartered in Woodland Hills, Calif., Litton has more than 40,000 employees in four major business units at facilities in 29 states and other locations worldwide. 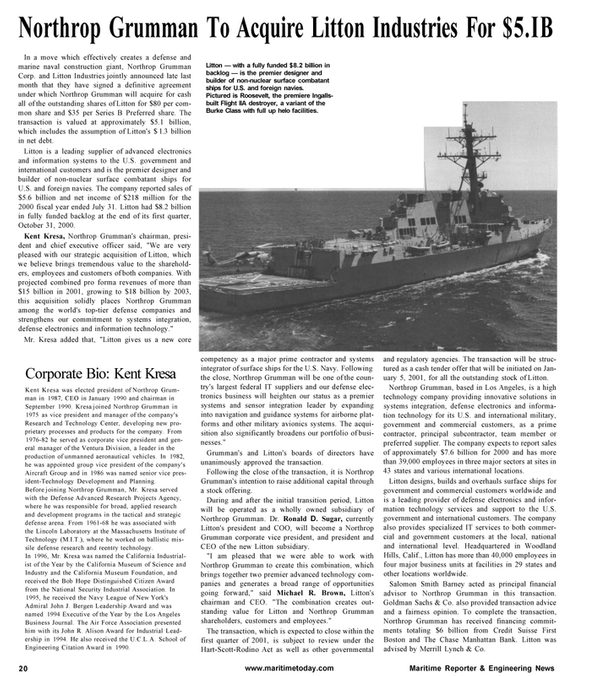