Autostructure is used to create a 3-D model of a vessel structure and to output the parts of that model in CAD format. The CAD representation can be used to either prepare construction drawings or for input to NC cutting processors. Autostructure utilizes an Autoship-generated hull and/or superstructure and can also include the shell plate information created in Autoplate. (Autoship and Autoplate are programs from Autoship Systems.) Every aspect of Autostructure was designed to allow parts to be created quickly and with minimal input. While there is a general workflow, no set ways or sequences are forced upon the user, thus enabling maximum productivity with minimum effort. And since parts can be generated rapidly, mistakes can be quickly and easily remedied. Also, if a part is changed or moved, Autostructure can update the surrounding structure for you, saving you time and effort.

The tools that Autostructure provides are: • A part database with a powerful categorization system • The ability to rapidly cut parts to the shell and/or each other • Sophisticated 2-D part editing • Comprehensive CAD output • Extensive reporting capabilities • A user-expandable Material library Autostructure is built on top of SQL7 - Microsoft's most powerful database system. As delivered, Autostructure can support up to five users either in a client-server or peer-to-peer network. For more than five users, a full SQL7 system should be purchased separately. Autostructure allows the user to set up a hierarchical system to organize the model. Three examples are: i) by actual structure i.e.

ring/block/module/subassembly; or ii) by designer: each designer could be assigned his/her own, separate assembly, which could be further subdivided, and would be able access the other designer's work; or iii) by material: for a repair job, the user might want to group individual parts by material type, i.e.

material/size/profile/grade. Also, for each project, Autostructure provides the user with the ability to set up a Permissions scheme that controls which operations each designer is permitted to perform.

Autostructure provides several different methods for creating parts. Autostructure also includes special tools that speed up the part-making process, such as the ability to rapidly copy the details (stiffeners, cutouts, openings and markings) from one part to another or to quickly subdivide a large part into the separate plates from which it would be constructed.

Additionally, each time a part is trimmed at the hull or another part, a weld path is automatically created along the trimmed edge. The weld paths can be used to generate weld relief cutouts on other parts and can be included in weight and scheduling reports.

All CAD output is automatically placed into Auto- CAD as an AutoCAD drawing. Three different formats are available: i) a 2-D array of selected part outlines with cutouts and markings, i.e. the typical information which would be sent to an NC-cutting processor and/or nesting program; ii) a 2-D presentation of parts, such as a cross section which would be used to prepare construction drawings; and iii) 3-D output to use for 3-D drawings to show the relationship of parts, or crucial construction details. Extensive control is provided for output, such as layer creation, size and 'thickness' of cross-section and type of stiffener marking.

Autostructure can generate many different reports, such as Weights and Centers, Bill Of Materials and Weld reports. The output is sent to Crystal Reports, which allows the presentation to be completely customized with minimum effort. Optionally, hull plate information created in Autoplate can be added to the Autostructure model and then included in reports, i.e. a center of gravity report for a sub-assembly can include the weight and centre of the shell plates, thus allowing the user to prepare a proper lifting arrangement for the structure.

Autostructure maintains a library of materials that includes material type, plate thickness, extrusions (stiffener profiles), flat bars and finishes (for rendering purposes). As each part the user creates is assigned properties from the library, consistency of material for all parts is guaranteed. 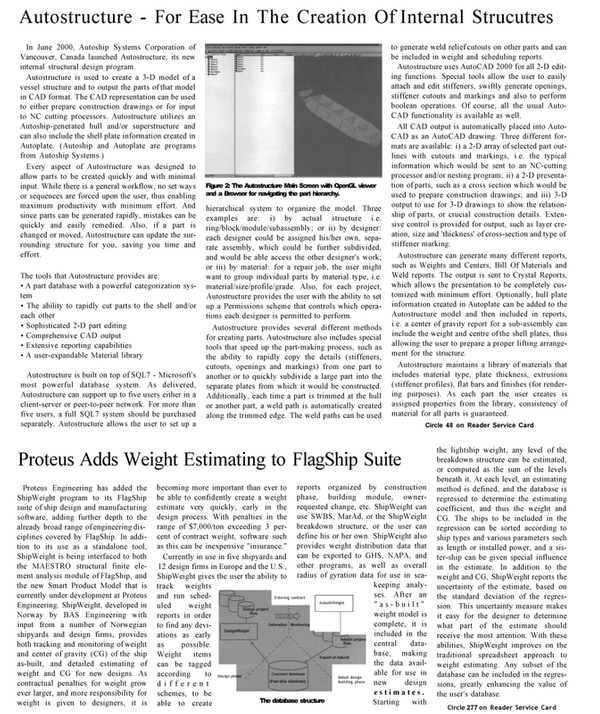 Read Autostructure - For Ease In The Creation Of Internal Strucutres in Pdf, Flash or Html5 edition of January 2001 Maritime Reporter