For the year 2000, Wartsila Corporation reports that 24 Sulzer RTA84T lowspeed diesel engines with an aggregate power output of 713.4 MW (970,800 bhp) have been ordered for installation in very large tankers contracted at shipyards in China, Japan and South Korea.

The engines will all be built by licensees of Wartsila in Japan and Korea.

Ten 305,000 dwt oil tankers recently contracted in China and South Korea by National Iranian Tanker Co (MTC) will each be propelled by a seven-cylinder Sulzer RTA84T-B low-speed diesel engine. The engines will have a maximum continuous output of 27,160 kW (36,960 bhp) at 74 rpm, and give the ships a service speed of 15.5 knots.

Ltd. at Ulsan, South Korea, with their delivery due during 2002.

Eight VLCCs and ULCCs for Hellespont Hellespont has contracted the first ULCCs to be ordered for many years.

Hellespont recently placed orders for a total of four 442,500 dwt ULCCs at Daewoo Heavy Industries Ltd, as well as four 310,000 dwt VLCCs at Samsung Heavy Industries Co Ltd, both shipyards being in Korea.

The ship is due for delivery in December 2001.

The ships are both due for delivery in 2002. A single 300,000 dwt VLCC has also been contracted by lino Kaiun at IHI that will be equipped with a Sulzer 7RTA84T engine.

All six RTA84T engines ordered by Japanese shipyards will be built under license from Wartsila Corp. by Diesel United Ltd. The Sulzer RTA84T lowspeed two-stroke diesel engine is specifically tailored for the propulsion needs of large tankers. It runs at low speeds (54 - 76 rpm) to match the optimum propeller speeds of such large ships.

These features contribute to the RTA84T being the most economical propulsion engine for large tankers. It is manufactured in two versions, the RTA84T-B and the RTA84T-D with a higher power output. Available with five to nine cylinders, the RTA84T covers a power range of 19,400 to 36,900 kW. 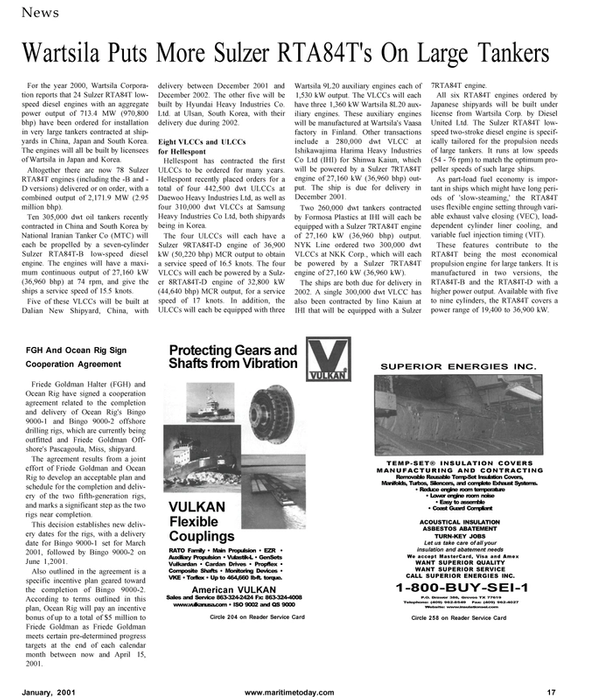