Noble Denton Europe Ltd. (NDE) was last month set to launch a new joint industry project aiming to improve FPSO design in order to optimize system safety and reliability, which will in turn lower operating costs and capital requirement. The study will focus upon reliability analysis and system modeling of critical limit states and follows on from a preliminary study, previously performed by NDE for the U.K. Health and Safety Executive (HSE). It acts as a catalyst to draw together current FPSO experience and will enable further development of the design process, through enhancing current understanding of the operational system behavior ofFPSO's.

It will address the shortcomings within the current design process and issues that have not yet been studied in any detail. The outcome is expected to identify cost-effective design improvements, based upon risk reduction benefits and life of field reliability. There is potential for producing optimized FPSO design guidelines and achieve a reduction in unnecessary construction and operational costs.

Brian Campbell, project coordinator for the proposed study, said, "We are all very excited by the new project. We truly believe that the results will revolutionize the way FPSO's are designed from the front end of the process, which will have tremendous effects on structural safety issues as well as costs." The project is set to commence in January 2001 and is scheduled for completion within a period of 18 months. 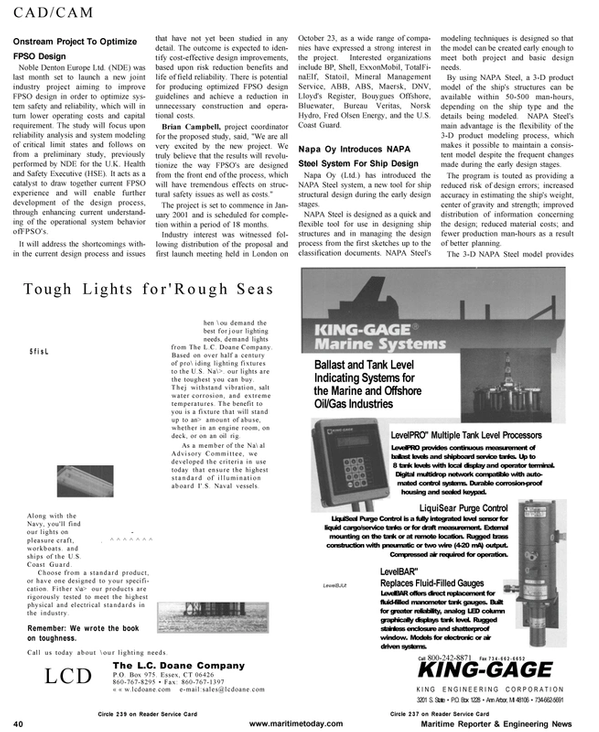