The Elizabeth River Project recently recognized NORSHIPCO as a top River Star for environmental contributions to improve the health of the Elizabeth The Ehz- abeth River Project granted River Star recognition to local businesses for their environmental achievements in creating and preserving more than 40 acres of wildlife habitat and eliminating more than three million lbs. of pollution in 1999-2000 alone. Only a handful of organizations have earned Model Level recognition since the inception of the program, and NORSHIPCO was the only shipyard to receive this level of recognition, the highest level possible in the River Stars Program.

The Ford Motor Company, Naval Station Norfolk and NOVA Chemicals are among the other recipients of the honor. NORSHIPCO's environmental contributions include solving an international challenge for shipyards involving TBT, an additive in marine antifoulant paints. NORSHIPCO pioneered technology by forming a business/research consortium, the Center for Advanced Ship Repair and Maintenance (CASRM), in cooperation with Old Dominion University and two other local shipyards. The consortium has developed treatment technologies for removing up to 99 percent of TBT (tributyltin) from shipyard wash water.

NORSHIPCO's additional contributions to environmental protection include: Expenditures of about $2.5 million for site improvements, including paving more than 46 acres and curbing 2.3 miles of roads and parking lots to reduce pollution from storm water runoff; development and implementation of alternative beneficial re-uses for various waste streams, previously sent to landfills for disposal. One of these uses pertains to spent abrasives. The material is mixed with soil and used locally as landfill day cover and road construction material; NORSHIPCO also sends paint wastes to facility where it is used as fuel for cement kilns; Employment involvement in 1998 in creating a wetland along a 400-foot section of the Elizabeth River Shoreline, lying within the shipyard facility. 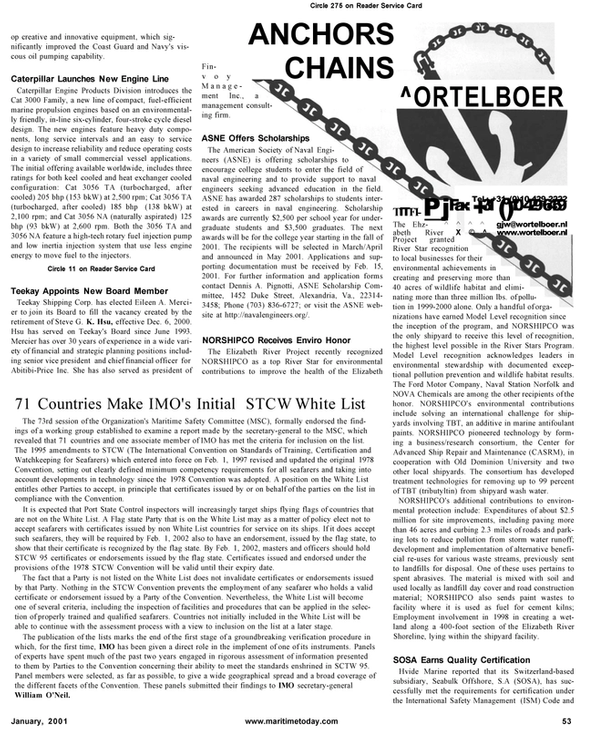