A new version of its Engine Room Simulator was introduced by Transas Marine at the beginning of November 2000. The Transas ERS 2000/3000 ver.5.3 features improvements to its functionality including enhanced modeling of the Steering Gear and of the interaction between Ship Diesel Propulsion plant, Ship Electric Power plant and Auxiliary Systems simulators. Transas added a number of subsystems to its Auxiliary Systems unit to simulate the use of the Engine Control Room as a fire prevention tool. These new subsystems include the Fire Main (water and foam) System, Fire Alarm Station, Engine Room Carbon Dioxide System (high pressure) and Actions in Case of Fire. Transas also designed a new-generation set of dedication hardware for the Ship Diesel Propulsion Plant, Ship Electric Power Plant and Auxiliary Systems simulators. The new dedicated panels and controls have been designed in full compliance with the latest equipment used onboard various types of vessels. Several maritime schools throughout the world are already benefiting from the technology developments introduced in the latest version of the Transas Engine Room Simulators. The Paul Hall Center for Maritime Training and Education, in Maryland, as well as two Spanish schools, the High Civil Maritime School in Coruiia and the Marine and Fishery Professional Education School in Palma de Mallorca, are among the users of this equipment. 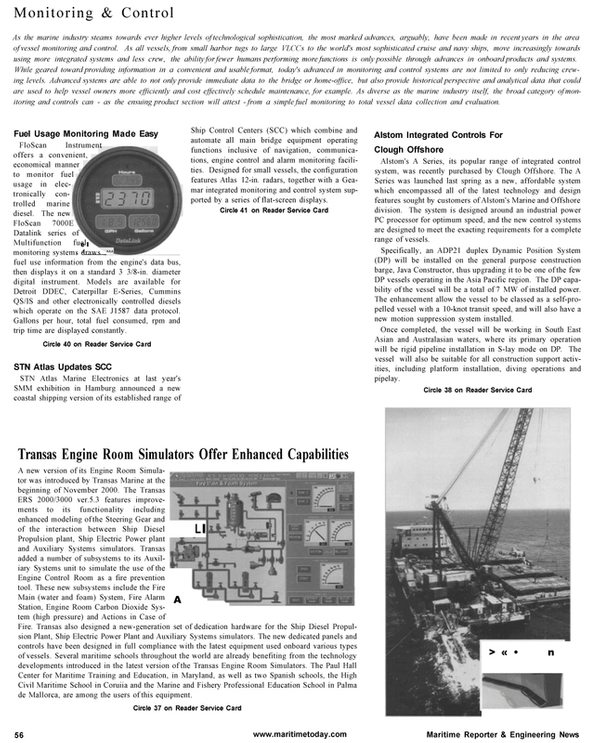