The newest Coast Guard vessel in Hawaii, the 87-ft.

(26.5 m) patrol boat Kittiwake, was designed to venture out on the sea when the strength of other ships has failed, when the mystery of that ship and crew's limits has been solved. To the men and women of the 14th Coast Guard District and the hundreds of sailors the new vessel will rescue in the future, the arrival of the Kittiwake is a beautiful sight.

Kittiwake was officially commissioned on June 30 during a ceremony held at Coast Guard Search and Rescue Detachment Kauai in Nawiliwili Harbor.

The Coast Guard has contracted with Bollinger to build up to 50 of the new 87-footers. Prior to the award of the current contract, Bollinger designed and constructed all 49 of the 110-foot Island-Class Patrol Boats, which have been called the "best patrol boat in the world," by both a prior Commandant of the U. S.

Coast Guard and a former Chief of Naval Operations.

The captain and crew of the new ship hope the Bollinger's 87 footers will be even better and were thrilled to be receiving the new ship.

Michael Schoonover, Kittiwake's commanding officer, who was also the C.O. of the Point Evans before it was decommissioned. "We're really excited." Schoonover and the crew of the decommissioned Point Evans picked up the Kittiwake on December 2, 1999 at Bollinger Shipyard in Lockport, La. to learn how to operate the ship. After learning the ship's systems, the crew sailed Kittiwake to San Diego via the Panama Canal.

In San Diego, the ship was hoisted 100 ft. (30.4 m) into the air and placed in a custom built cradle on the deck of the USS Essex, a Navy amphibious assault ship, for the transpacific journey to Pearl Harbor.

Once in Pearl, the ship was hoisted off the Essex, towed to Coast Guard Group Honolulu on Sand Island and made ready for sea. After supplying and refueling at Sand Island, the Kittiwake put to sea under her own power for the first time in the Hawaiian Islands. The ship left Sand Island, headed for Kauai and arrived in Nawiliwili Harbor four hours later. With its two 1,400 horsepower MTU 8V396TE diesel engines, Kittiwake made the trip twice as fast as the Point Evans' best record.

Speed is not the only advantage the Kittiwake holds over the Point Evans. Kittiwake's steel hull and aluminum superstructure were designed to handle 30-foot sea conditions and house an innovative stern-launch and recovery system for its deployable diesel-powered wateijet small boat.

The ship has quarters for a mixed-gender, 10-person crew, and is in compliance with all current and project- ed environmental protection laws.

"The quality of living on the 87's is 100 times better than the 82's," said BM3 Marc Snyder, a deck force supervisor aboard the Kittiwake. "It's a much better ride. The 82's had a round bottom and they were like a football in the water. The 87's have chines, so they don't bob around nearly as much." A large pilothouse provides 360-degree visibility, while enclosing an integrated and sophisticated state of the art command and control system, which includes electronic chart displays, an advanced surface search radar, and the Coast Guard's Standard Work Station III computers to improve the crew's ability to perform Search and Rescue and Maritime Law Enforcement missions.

The new computers also give the crew access to technical publications and drawings on CD-ROM for more efficient maintenance and repairs.

But even with all the benefits the cutter's advanced technology affords the crew, the Kittiwake and the Coast Guardsmen who serve on her still have their work cut out for them.

The Kittiwake has assumed the Point Evans' Area of Responsibility, which extends 200 miles from the eight major Hawaiian Islands. This will regularly take the ship through each of the notoriously dangerous interisland channels as it performs its primary missions of search and rescue and law enforcement. In this AOR in 1999, the Point Evans saved 60 lives and over $1 million in property.

Schoonover turned command of the ship over to Lt. j.g. Jennifer Cook, a 1998 Coast Guard Academy graduate, coming from a tour as the combat information officer and administration officer aboard the CGC Rush, a 378-ft. (115.2 m) High Endurance Cutter homeported in Honolulu.

Since the commissioning and change of command, the Kittiwake and her crew have continued training and are ready and waiting for the Search and Rescue alarm to send them out to test their highly capable new ship and their own courage against foul seas and howling winds. 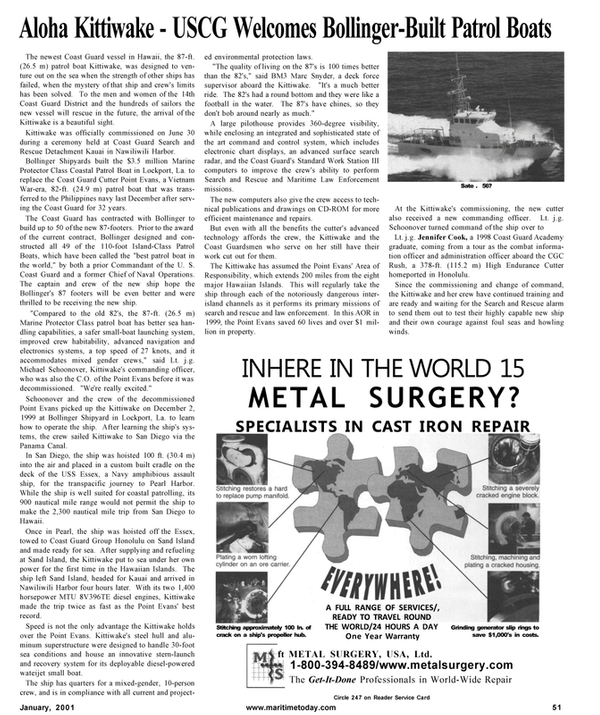