The Doctor Is "In"

The responsibility of melding, developing and profitably leading one of the world's most prolific high-technology marine companies is, to say the least, a daunting task. Assuming the post with no marine industry experience would seemingly make the job all the more difficult. But Dr.

Saul Lanyado (pictured right) enters his position as the new president of the Rolls-Royce Marine division armed with years of engineering and business success and savvy. Maritime Reporter recently sat with Dr. Lanyado in his Buckingham Gate, London office to discuss the company's current endeavors and future developments.

— by Greg Trauthwein, editorial director At the outset of a discussion regarding Rolls-Royce's marine business, it is immediately evident the direction in which one of the world's new leading players in marine propulsion is heading. Rolls-Royce, which arguably possesses one of the world's brand names most closely linked to superior quality, will heretofore be regarded as a high technology company. While the company is well regarded for its engineering and manufacturing prowess, and has effectively assembled a wide range of brand name marine propulsion, deck machinery and ship design products and companies, the future lies in its ability to develop and/or acquire more advanced, integrated ship systems for both the naval and commercial markets.

While Dr. Lanyado was, naturally, not at liberty to tip his hand on imminent deals or interesting prospects, he admitted that Rolls-Royce may not be finished in terms of acquisitions, and he views prudent investment — either internal or external — as an expansion of the company's capabilities. "There are a number of companies, both large and small, that appear attractive," he said. "As a group, we are constantly looking for affordable opportunities." Noting that the mechanical side is just one aspect of today's complex, integrated ship power system, he said that acquisition or partner companies of particular interest: the "new" areas of propulsion, Electric and Electronic, or motors that are not dependent on mechanical linkages.

Regardless of future prospects, Rolls-Royce's management task at hand from its London headquarters, in the near term, remains a formidable one, that being the seamless integration of the company's current divisions.

Best known, perhaps in the marine realm, for its gas turbine technology, Rolls-Royce is in reality a conglomeration of some of the biggest names in marine products, including Ulstein, Kamewa, Brown Brothers and Michell Bearings.

The company offers a vast array of marine products and services for both military and commercial applications, serving vessels both large and small, ranging from ship design, ship equipment and integrated systems solutions. These individual brands, not too long ago, were independent companies with strong allegiance from both employees and customers alike. The challenge: maintaining the local company strengths (the point of the acquisition in the first place) by effectively managing an array of cultures, products and managements systems while assimilating the Rolls- Royce philosophy and strengths throughout the system.

Leaving His Fingerprints Dr. Lanyado's high-tech background more than likely was a leading factor in his selection as the man to lead Rolls- Royce Marine into the new millennium.

Graduating with a BSc (Honors) degree, first class in Electrical Engineering from University College in London, and later earning a MSc and PhD in Computer Science at Manchester University, his course includes progressively highranking posts at world-leading electronics companies.

Most recently he served as Group Managing Director of the airborne electronic systems group at GEC Marconi Avionics.

On the gargantuan task of successfully melding the many facets of his current unit, he flatly states "I will get personally involved." He notes that his career has been spent in the international marketplace, working across many cultures simultaneously.

And while the job of getting all units on the same page may appear daunting, the premise that will guide him is the autonomy of companies to act in the manner, which made them successful in the first place.

"Regardless of Rolls-Royce history, the individual companies are the world leaders, and we have the challenge to make sure that we manage them well," Dr. Lanyado said.

While he promises hands-on involvement, his management style is one that encourages innovation, and values motivation rather than control. "I think it has been shown (in high-tech industries) that you must capture people's imaginations, and while you have control of them in the corporation," you allow them much leeway to encourage innovation, which is the fuel for growth.

Specifically, Dr. Lanyado believes that while it is sometimes easy to revert all decisions back to fiscal considerations, it is crucial to consider products and people equally with the bottom line. In the development of new or improved products and systems, he strives to marry the concepts of cost with innovation as early in the process as possible, which he believes will result in exciting, marketable products.

The present and future of the company all rolls back to the famous name, a name that Lanyado admits "is a great responsibility to keep up." The Rolls-Royce name and corporate presence is deemed attractive to the marine community as it provides first and foremost, a global reach for its product and service solutions. Beyond the polish of the company placard, however, is the ability of local organizations to extend the level of local service that will maintain happy clients and promote the company to new ones. This should serve as a strength in the new organization, as the company has assembled a roster of traditional marine companies well regarded for product and services.

Lanyado places a high value on localized customer care, calling the local the companies and employees diplomats for the company.

WR-21 Nearly Ready For Market Despite the many strategic additions to its marine product line-up, the gas turbine remains a central focus in the company's endeavors in both the naval and commercial realms. In an attempt to gain valuable market share against its rivals, Lanyado said that much effort and capital is being invested in the expansion of the gas turbine portfolio, as it is being pushed into the 25, 30 and 50 MW power ranges to fill gaps in power range coverage.

In late October the company announced a strategic agreement between it, Northrop Grumman and French marine engineering company DCN to produce and market the WR-21 Marine Gas Turbine Engine. With an eye on providing primary power units for the world's naval fleets while continuing its efforts to infiltrate specialized commercial markets, the agreement is touted as the establishment of a world class team for the intercooled and recu- Cirde 251 on Reader Service Card 5 0 perated WR-21. The WR-21 engine has successfully completed the development phase of the U.S. Navy, Royal Navy and French Navy funded full-scale development program in February 2000. The final phase of the WR-21 program is now started, with a 3,000-hour endurance qualification currently underway at DCN's Indret facility. The test is scheduled for completion in early 2002.

In an effort to break competitor's GE's stronghold on the marine gas turbine business, Rolls-Royce points out that the WR-21's advanced cycle recovers energy from the engine's exhaust gas to increase fuel efficiency across the operating range. "The intercooled and recuperated WR-21 has already demonstrated more than 25 percent annual fuel savings in mechanical drive configurations, compared with existing simple cycle gas turbines, and is on track to reach more than 27 percent in its final production configuration," said Jim Hupton, vice president of Northrop Grumman Marine Systems. 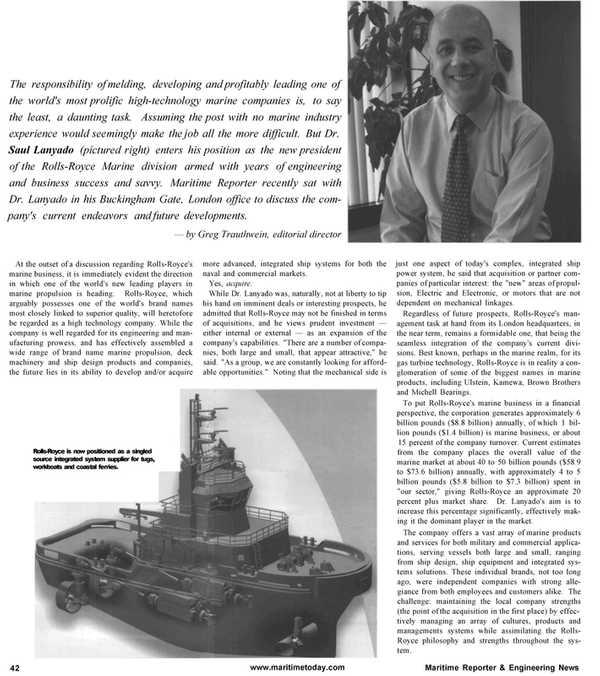 Read The Doctor Is "In" in Pdf, Flash or Html5 edition of January 2001 Maritime Reporter