The M/V George A. Stinson, the first 1,000-foot super ore carrier in National Steel Corporation's Great Lakes fleet, was christened in Detroit, Mich., on August 21 by Mrs. George A.

Stinson, in honor of her husband who is chairman of National Steel.

She broke the traditional bottle of champagne against the bow of the huge, self-unloading vessel as several hundred invited guests looked on to join in her wish of "Godspeed and good luck," in ceremonies at the Downtown Detroit Riverfront.

In remarks at the ceremony, chairman Stinson pointed out that "in a larger sense, the vessel signifies an important commitment by National Steel to modernize and remain competitive in the world business community. At a time when we have seen foreign ships use these same waters to unload steel in the American market at illegal prices, this highly sophisticated vessel is another example of the plain fact that our equipment is as modern and competitive as in any other steel operation overseas.

"And, although I am very proud to have this vessel bear my name, I would like to dedicate it to all people in the Detroit area: to the many thousands of past, present and future employees of the Great Lakes Steel Division who convert iron ore and coal into steel . . . to our many customers in the Detroit area who make cars and other products people need . . . to the many city officials in Detroit and also in Ecorse and River Rouge, where our Great Lakes Steel operations are located . . .

to our many suppliers . . . and to our many friends throughout this area who have encouraged us over the years." Howard M. Love, National's president, said in his remarks opening the ceremony that "this christening is especially significant since it conveniently comes at a time when National Steel is experiencing a 'new birth' in its business life.

"In the past five years alone, it is interesting to note that National has invested more than one billion dollars in its plants and equipment. This program has enabled us to modernize our plants and to increase our steelmaking capacity by more than two million tons per year." Designed and built by the Am- Ship Division of American Ship Building Company, Lorain, Ohio, the M/V George A. Stinson has a length overall of 1,000 feet, a beam of 105 feet, depth of 50 feet, and a draft of 28 feet. She will be operated by The Hanna Mining Company of Cleveland, Ohio, manager of National Steel Corporation's Great Lakes vessels.

The ore carrier will transport about half of the 5.8 million tons of iron ore pellets being produced yearly at the newly expanded National Steel Pellet Plant at Keewatin, Minn., destined primarily for National's Great Lakes Steel and Weirton Steel Divisions. She has a capacity to transport 59,000 gross tons of iron ore pellets, at maximum summer draft, or 52,000 net tons of coal, at a full-load speed of 15.8 mph.

The M/V George A. Stinson has the largest carrying capacity in National Steel's fleet of Great Lakes ore-carrying vessels, and is one of the most efficient selfunloading type vessels of its kind, utilizing two belts under the cargo hold hopper bottom. It is equipped with a 260-foot-long unloading boom, operable on either side of the 105-foot beam of the boat.

Using its loop belt system, the super ore carrier can unload its maximum 59,000-ton-capacity cargo at the rate of 10,000 gross tons of pellets or 6,000 net tons of coal per hour.

Propulsion, navigation, environmental, and safety equipment also are all of the latest design. Powered by twin diesels producing 16,000 hp, her twin rudders, twin controllable-pitch propellers, and a 1,500-horsepower bow thruster all assist in safe maneuvering. A dual radar system, one forward and one aft, aids in night and poor visibility navigation. Her covered motorized lifeboat is the first on the Great Lakes. 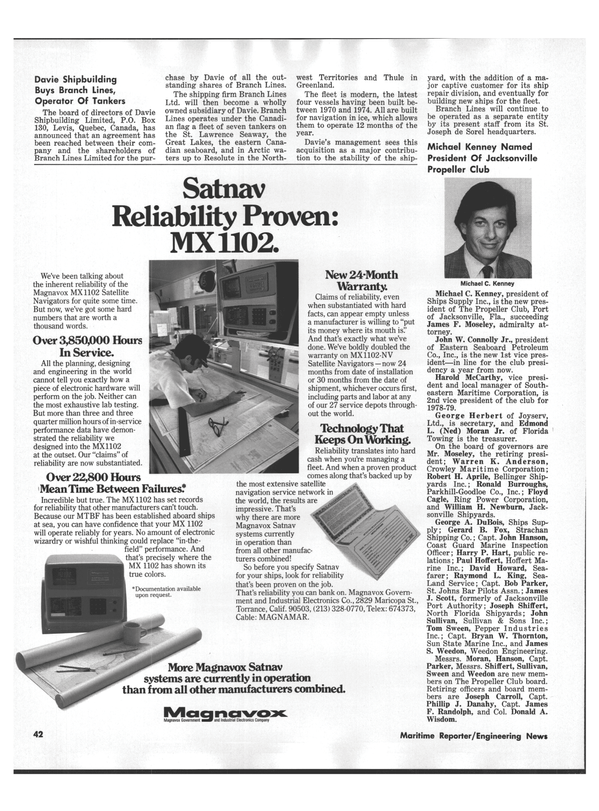