A reorganization of the Dutch shipbuilding industries has resulted in the merger of IHC Gusto, the offshore yard of IHC Holland, into the Rhine-Schelde- Verolme Group (RSV) .This merger became effective July 15, 1978.

The production facilities of Gusto will be shut down and its labor force will be transferred to the RSV yards, principally the large Verolme Dok-en Scheepsbouw at Rozenburg, near Rotterdam.

The IHC Gusto design and engineering departments (approximately 130 men) has been merged into a new engineering company under the name of RSV Gusto Engineering. IHC Gusto Engineering has a well-established record in the offshore industry, having designed such advanced systems as the Pelican type dynamic positioned d r i l l s h i p s , large offshore cranes such as Thor, and the 3,000-ton crane for Heerema's semisubmersible crane barge Balder, jackups such as the Maersk Explorer, pipelaying barges including the Viking Piper, and offshore storage systems such as the Shell Esso Brent Spar. IHC Gusto received the 1978 Offshore Technology Conference Distinguished Achievement Award, which in a large part was due to the accomplishments of the Gusto design and engineering departments.

The new company, RSV Gusto Engineering will, in addition to p r o v i d i n g engineering services, continue to offer the famous Gusto products to the offshore industry. In view of the policy of many governments to stimulate construction in domestic shipyards, RSV Gusto Engineering has been organized to provide complete project r e s p o n s i b i l i t y for engineering and construction of offshore systems at any shipyard in the world. This philosophy had already been successfully implemented in the construction of a series of 2,000-ton and 3,000-ton offshore cranes for the Netherlands O f f s h o r e Company and Heerema Marine Contractors.

These cranes were built by Sumitomo Heavy Industries in Japan under the project management, engineering, and quality control provided by Gusto. J.D. Bax and W.A.G. de Vries have been appointed as managing directors of RSV Gusto Engineering. 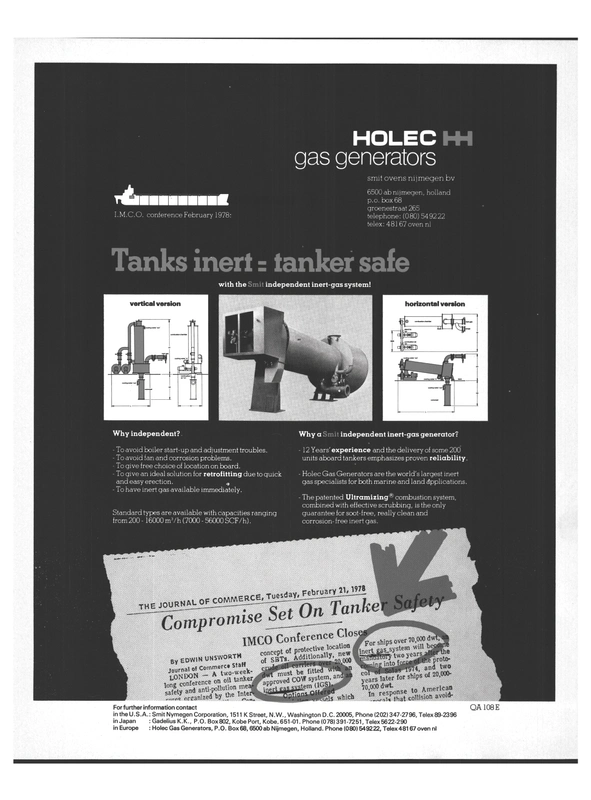