Veteran shipbuilder Robert Ivey has been named to the newly created position of manager of repair services for Mississippi Marine Towboat Corporation, Greenville, Miss., according to MMTC president John Nichols.

Mr. Ivey is a Vicksburg, Miss., native, and comes to MMTC from Zapata Offshore in Houston, Texas., where he served as construction superintendent on offshore drilling rigs, including semisubmersibles, drillships, jackups and platforms. During the five years he worked for Zapata, his responsibilities covered not only new construction, but also supervising the conversion of a 410-foot bulk ore carrier into a drillship with an 8-point mooring system capable of drilling in 600 feet of water.

His work included projects in foreign yards as well as numerous projects in U.S. shipyards.

Prior to working for Zapata, Mr. Ivey was employed by Marathon LeTourneau in their Vicksburg and Houston operations. Mr.

Ivey started with R.G. LeTourneau in the early 1960s. While at LeTourneau he worked in quality control, in the physical construction of drilling rigs, in estimating, contract administration and in the movement of the rigs from the V i c k s b u r g construction site to Belle Chasse, La., where the drilling units were completed and delivered to the owners.

Mr. Ivey brings a large amount of experience in steel erection and planning to Mississippi Marine.

Mississippi Marine Towboat Corporation, founded in the mid- 1960s, specializes in all phases of marine construction and repair.

The firm employs 80 people, and is located on the Greenville harbor front. 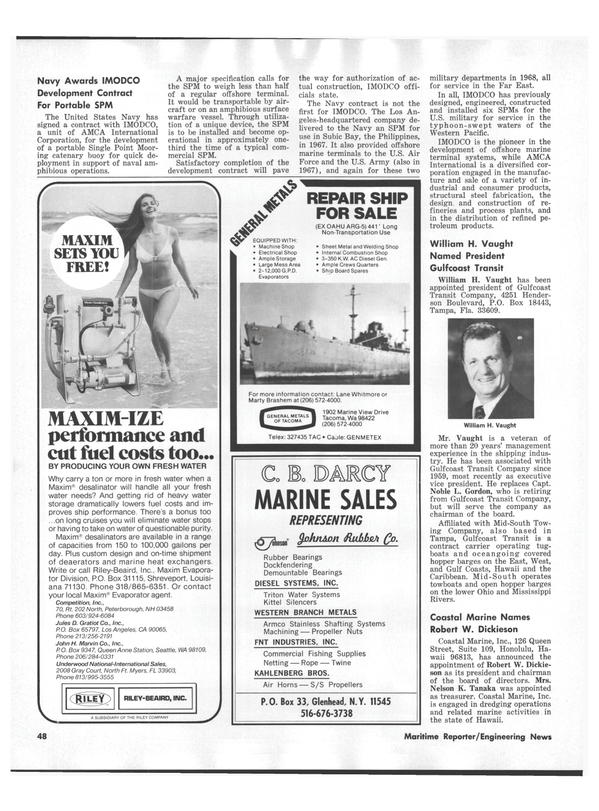