Halter Marine, Inc. has added the 10th shipyard to its rapidly expanding group with the opening of a new division at Chickasaw, Ala.

The new shipyard is located on a fork of the Mobile River five miles north of the city of Mobile, on a site formerly occupied by the Gulf Shipyard. During the two world wars, Gulf built scores of troop carriers and Liberty ships at the location. Gulf abandoned the site after World War II, and it has remained vacant since that time except for small boat construction on an irregular basis.

The Chickasaw Division encompasses approximately 20 acres, including 1,100 feet of launch ways and 700 feet of berthing space. Also included is a giant steel frame building which is 400 feet long, 100 feet wide and 70 feet high. The building is currently in a state of disrepair, but when renovated will be used for burning plate and for the construction of sections and subassemblies.

Railroad tracks around the building and construction area facilitate movement of heavy equipment and assemblies. A huge mold loft occupies the upper portion of the building.

Sixty persons are already at work at Chickasaw and up to 300 will be needed within five months, according to Floyd J. Naquin, Halter's executive vice president, who made the announcement. The yard is currently building four 66-foot lift boats and one 166-foot supply boat. Mr. Naquin added that Chickasaw's 40-foot water depth and easy access to the Gulf of Mexico will allow the company to expand its product line to larger and deeper draft vessels.

Halter's nine other shipyards are located at New Orleans, La.

The company builds a wide variety of vessels of steel, aluminum and fiberglass, and is the world's largest builder of supply boats for the offshore oil and gas industry. 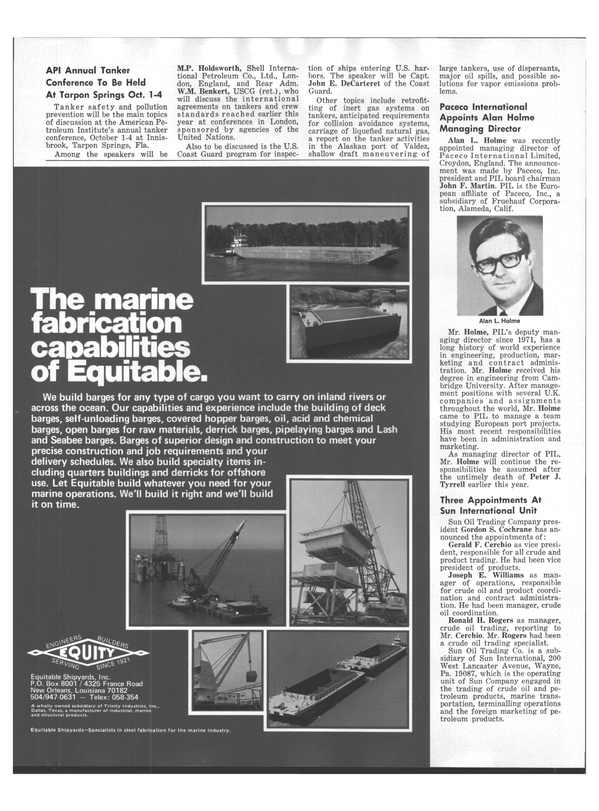