"It's not that unusual; everyone has to make a living," says Lee Ann Tyler, the first female officer ever to serve aboard one of the Army Engineers' seagoing dredges, the Comber, working out of the Philadelphia District.

Lee Ann works the day shift from 8 a.m. through 4 p.m. for 10 days and then has four days off, as do all hopper dredge assistants.

Separate facilities have been provided for her. Otherwise, Lee Ann says she is just "one of the guys." The experience of working on a dredge is like every experience. It's a learning process.

Hired for the summer as a hopper dredge assistant aboard the Comber, which was built in 1947 and is responsible for maintaining the Delaware River channel at its authorized depth of 40 feet, Lee Ann performs the same tasks as her male counterparts — deck work, some navigation and assisting the dragtender, quartermaster and deckhands.

Twenty years old and a native of Long Island, N.Y., Lee Ann is not taken by surprise by the marine life; one of her first interests was sailing. This fall, Lee Ann will be a senior at the New York Maritime College, where she is studying marine transportation, with economics as her major. Lee Ann is uncertain of her exact career plans, but hopes to eventually get her master's license.

Being the only female on the dredge comes as no shock since her school is mostly male. Lee Ann is accustomed to adjusting to being surrounded by males. She feels that being a female in this type of job is nothing spectacular.

Her interests happen to lie in what is presently a maledominated field.

When asked how she feels about being waited on by a male at dinner, Lee Ann responded, "I put in my day's work as a hopper dredge assistant, and that's how he puts in his day's work." 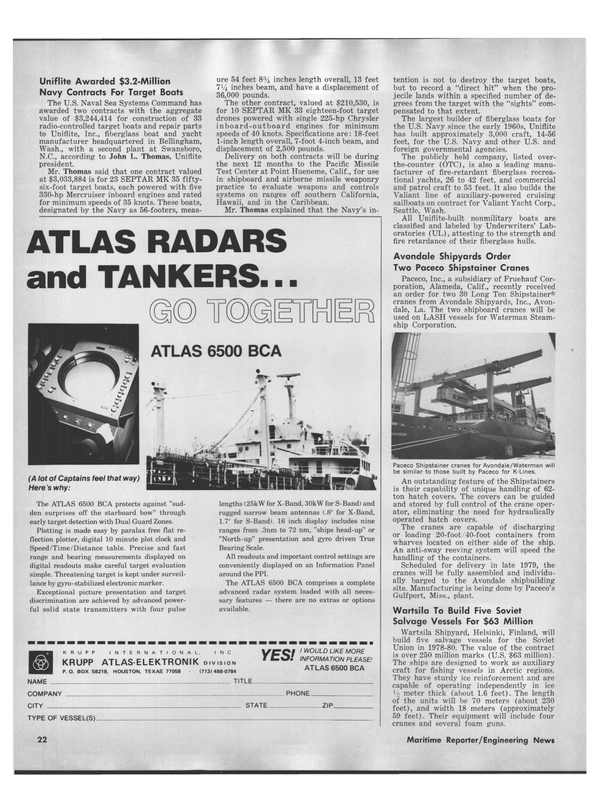