The Camden Ship Repair Company, a shipyard which has been repairing vessels since 1834, has recently invested a million dollars in purchasing and reconditioning a 700-ton floating drydock. This facility can accommodate ships up to 160 feet in length and 60 feet in beam. The drydock is part of an ambitious growth program, designed to bring the shipyard back to its World War II prominence.

At that time, the yard was known as the Mathis Shipbuilding Corporation. It employed upward of 1,200 workers, who launched one minesweeper every 30 days.

Today, the accent at the yard is on ship repair, which is handled by a much smaller number of skilled marine craftsmen, most of whom have over 20 years of ship repair experience.

According to Joseph G. McCann, president, the floating drydock is part of a $4-million proposed expansion program. He says that the completed expansion could result ultimately in an increase annual gross sales of 1,000 percent.

Located at Cooper's Point on Camden's north shore, the company has the good fortune of being the only commercial repair yard along the Delaware River, and the only one between New York City and Baltimore, Md. Presently, it repairs and maintains 240 to 270 vessels. The floating drydock is expected to double this number. Current facilities at the yard include a 700-ton-capacity marine railway which can hold ships 250 feet in length, a 50-ton-capacity marine railway for crafts up to 50 feet long, two working piers, and fabricating, machine, pipe, paint, electrical, diesel and sheet metal shops.

In addition to the drydock, Mr. McCann has also outlined other parts of the Camden Ship Repair Company expansion program.

Upon completion of some dredging by the Army Corps of Engineers in the Delaware River's "back channel," Mr. McCann is planning to have 35,000 cubic yards of silt dredged from the company's docks. This dredged material will be used to fill in an area between the piers after bulkheads are in place. Two piers will also be restored as working areas, thus creating an additional 1,000 feet of berthing space. Simultaneous with the dredging, landfill and bulkhead improvements, will be the installation of a 2,400-ton-capacity marine railway and related facilities. A 50-ton-capacity mobile crane will also be brought in to supplement the shipyard's two 35-ton-capacity mobile cranes now in use.

The bulk of the Camden Ship Repair Company business presently draws from East Coast shipping. However, as a result of its aggressive expansion program, the company expects to attract repair business from shipping outfits in the Midwest and Gulf of Mexico. It also will service the support vessels for the offshore oil rigs in the Baltimore Canyon off the New Jersey-Delaware Coast.

Says Mr. McCann: "If everything works out as planned, even though the Camden Ship Repair Company saw its heyday in World War II, it might still experience an even greater history-making feat in the very near future." 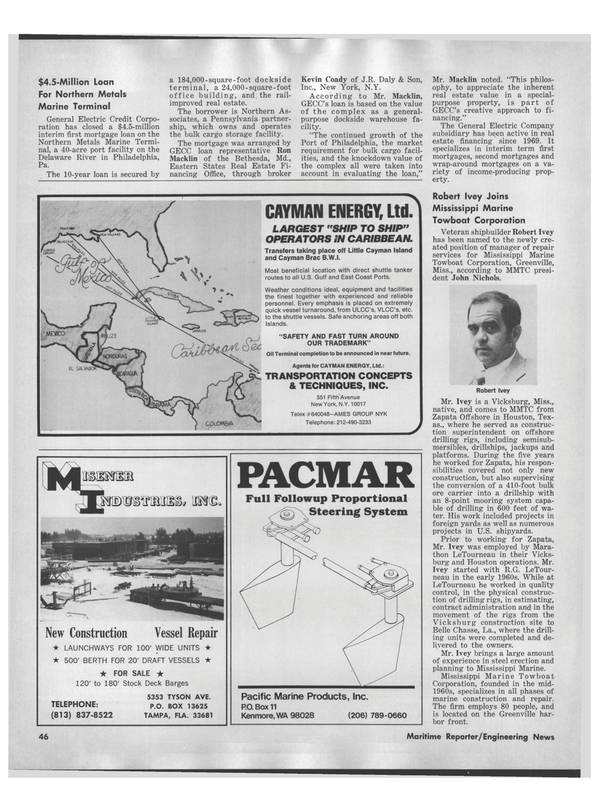