Mrs. James J. Glasser, wife of the president of GATX Corporation, was the Buffalo's sponsor.

She highlighted the colorful event when she shattered a bottle of New York State champagne on the ship's bow, accompanied by band music and applause from a large crowd of spectators.

James D. Griffin, Mayor of the City of Buffalo, was the principal speaker at the ceremony, which was held in the yard of the Bay Shipbuilding Corporation, a subsidiary of The Manitowoc Company, Inc. As part of his remarks, Mayor Griffin stated: "With the help of the shipping industry, the Great Lakes will combine to play a vital and prominent role in the lives of the residents of Buffalo and other major cities. Such a partnership will make our respective voyages both safe and successful." Following the christening, dignitaries and guests, who included government and corporate officials and their families, attended a luncheon at the Leathern Smith Lodge in Sturgeon Bay.

The Buffalo's flexible design enables her to carry iron ore pellets, coal, and other bulk commodities.

Her 635-foot length—slightly longer than two football fields— will permit the ship to use port and dock facilities that would be inaccessible to larger carriers.

Her two diesels will provide 7,000 shaft horsepower, and will enable the Buffalo to transport cargoes at a service speed of 15.5 miles per hour.

The ship is the seventh new carrier to enter service since 1973 in ASC's current building program.

This has added 250,000 long tons of new capacity to the ASC fleet, which now totals 20 vessels.

The company has been headquartered in Buffalo since 1907, and both it and the city have been major contributors to the growth of commerce on the Great Lakes. 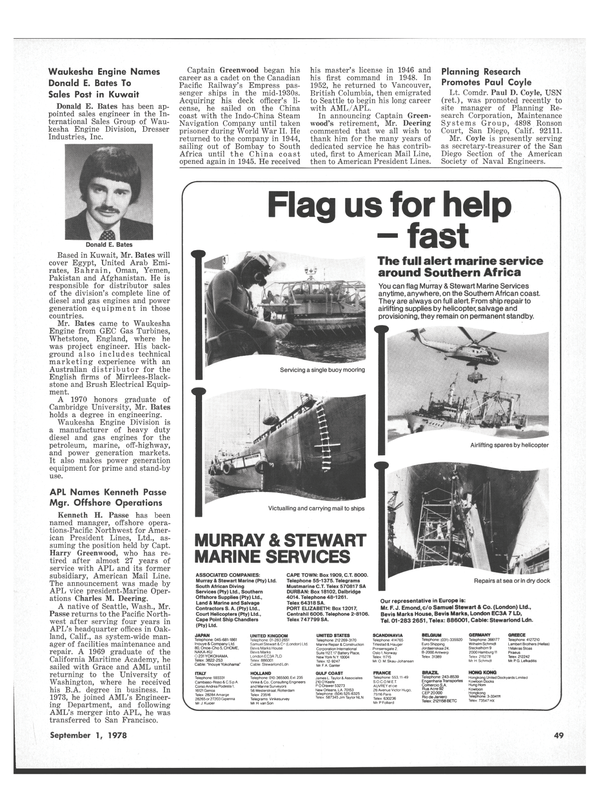