American President Lines (APL) of Oakland, Calif., has called for bids for construction of an initial order of 733 forty-five-foot containers (prototype shown above), the world's first, according to Richard L. Hill, vice president for land operations and project manager. The new containers will have a cargo capacity of 3,035 cubic feet, some 27 percent more than the standard 40-foot container. Because handling and transportation costs are largely determined on a unit basis rather than by the size of the container, the larger vans are expected to provide significant savings, and to help hold the line on rapidly rising costs. Each container will be 9 feet 6 inches high.

The 45-foot container is not expected to replace the standard 20- and 40-foot lengths, and will initially be designated for on-deck stowage only. It is anticipated that APL's 45-footers will be deployed on selected intermodal routes in order to increase operating efficiency. Initially, they will go into service to haul less-than-containerload (LCL) cargo between major Asian ports and Northeastern U.S. destinations.

In March this year, the company announced that it was building two prototype 45-foot containers. Those are being rigorously tested. One has commenced a series of trans-Pacific crossings so that the crew and land operations personnel can become familiar with it; the other is undergoing final structural tests by its manufacturer, Fruehauf Corporation, in Detroit. The company has also called for bids to construct several hundred 45-foot chassis, also the first of their kind.

The new containers have been designed to be accommodated on existing 89-foot 4-inch standard intermodal railcars, in both the container-on-flatcar (COFC) and trailer-onflatcar (TOFC) modes, and can be lifted by standard 40-foot container-handling devices.

Dual post fittings on the underside of the container make it compatible with the intermodal transportation concept.

The containers will be constructed of aluminum, with steel end frames. They are designed for a payload of 64,300 pounds, and are expected to operate on the interstate highway system at 50,000 pounds.

The company has previously reported that its three C-9 class diesel-powered containerships, presently under construction, have been designed with a structure that can be modified to accept the 45-foot containers under deck as well as the standard 20- and 40-foot lengths. Those vessels, with a cargo capacity of 2,500 twenty-foot equivalent units (TEUs), will be the largest of their kind ever built in the U.S. 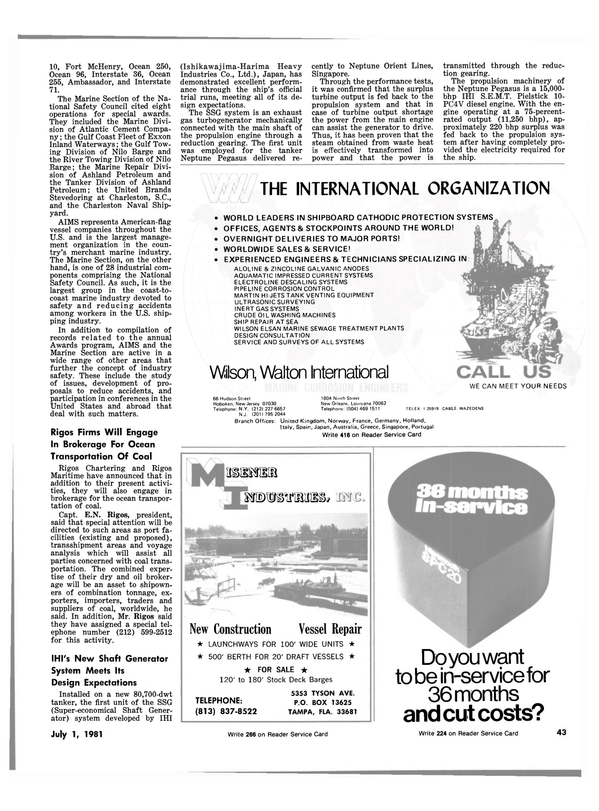