A total of 31 United States m a r i t i m e i n d u s t r y operations were cited recently for outstanding achievements in safety, including one that has functioned for more than seven years without an accident resulting in lost time among crew personnel of the vessel.

Co-sponsored by the American Institute of Merchant Shipping (AIMS) and the Marine Section of the National Safety Council (NSC), the award ceremony at the Downtown Athletic Club in New York included top government officials and maritime company representatives in a broad r a n g e of i n d u s t r y a c t i v i ty throughout the country.

Known officially as the Annual Ship Safety Awards Luncheon, the event was hosted jointly by the two key organizations, which spearhead accident reduction efforts nationwide in the maritime industry. The awards program covered operations of oceangoing general cargo ships, tankers, and passenger vessels, s h i p b u i l d i ng and vessel repairing, stevedores, barge and towing services, and other activities of companies represented by both organizations.

Each group handled awards for its own member companies.

P r e s e n t a t i o n s by the AIMS group are known as the Jones F. Devlin Awards, and are based on accident-free operations by United States-flag ocean vessels of at least two years duration.

Award presentations were made by retired Coast Guard Rear Adm. William R. Benkert, president of AIMS, and Capt. Jones F. Devlin, a former official with United States Lines Company and an acknowledged leader in maritime safety, after whom the AIMS awards are named.

He was assisted by Capt.

Six U.S. companies were eligible to receive Devlin awards from AIMS this year, and 23 individual A m e r i c a n - f l a g vessels were cited for continuous operations with no member of the crew missing a turn at watch due to injury. Devlin awards are based on three catergories of accidentfree operations—two years, four years, and five years or more.

In the category of five years or more, AIMS awarded plaques to two operations. The vessel names and company affiliations are Amoco Connecticut of the Amoco Shipping Company; and the oceangoing barge Interstate 55 of the Interstate & Ocean Transport Company, which was cited for accident-free operation of 2,795 consecutive days, or more than seven years.

In the AIMS category of four years, awards were made to four vessels of Interstate & Ocean T r a n s p o r t Company. Included were Interstate 50, Ocean 115, Argoil 160, and Transporter.

AIMS represents American-flag vessel companies throughout the U.S. and is the largest management organization in the country's merchant marine industry.

The Marine Section, on the other hand, is one of 28 industrial components comprising the National Safety Council. As such, it is the largest group in the coast-tocoast marine industry devoted to safety and r e d u c i n g accidents among workers in the U.S. shipping industry.

In addition to compilation of records r e l a t e d to the annual Awards program, AIMS and the Marine Section are active in a wide range of other areas that further the concept of industry safety. These include the study of issues, development of proposals to reduce accidents, and participation in conferences in the United States and abroad that deal with such matters. 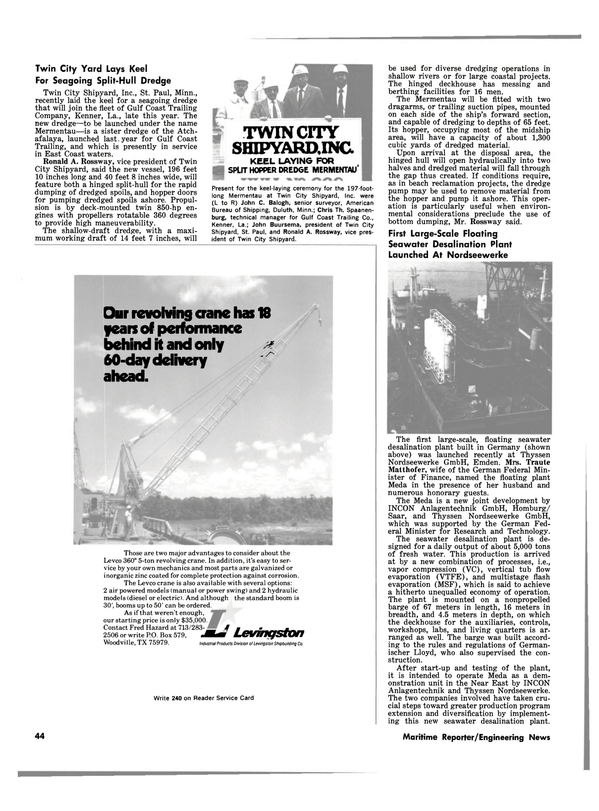