6Construction is under way on a seagoing barge that includes in its equipment the first loop-belt type self-unloading conveyor system specifically designed to handle blended wet phosphate rock.

The 610- by 78-foot barge is being built by the Bay Shipbuilding Corporation, Sturgeon Bay, Wis., for the Beker Shipping Company of Greenwich, Conn. The loop-belt self-unloading equipment and related machinery is being supplied by Stephens-Adamson, Inc., an Allis-Chalmers Corporation subsidiary.

The barge is of tug notch design, in which the stern is fitted with a deep notch to accommodate a 7,200-bhp tug that propels the barge. The all-welded barge will be used to transport phosphate rock between Tampa, Fla., and a Mississippi River port.

A loop-belt, self-unloading conveyor system is a development of Stephens-Adamson that is used extensively on Great Lakes bulk carrier freighters. The system involves a double set of conveyor belts that are sandwiched togeth- er by rollers in order to permit bulk material to be elevated from a lower level, as a ship's hold, to a higher level for discharge. The arrangement is very compact, freeing ship's space for payload.

Wet phosphate rock is a term used in the industry to describe phosphate ore that has been cleaned by washing and screening, but has not yet been converted into usable fertilizer. Physically, it resembles beach sand.

The system on the Beker Shipping barge is rated 4,500 short tons an hour and has a 68-foot lift.

The barge also will be outfitted with 35 units of recently developed Stephens-Adamson bulk flow gate used in releasing bulk materials from ship's hoppers. These are used with a conveyor that traverses the 495-foot-long cargo hold, bringing rock to the loopbelt unit. A boom with a conveyor will move the rock from the loopbelt discharge to hoppers ashore. 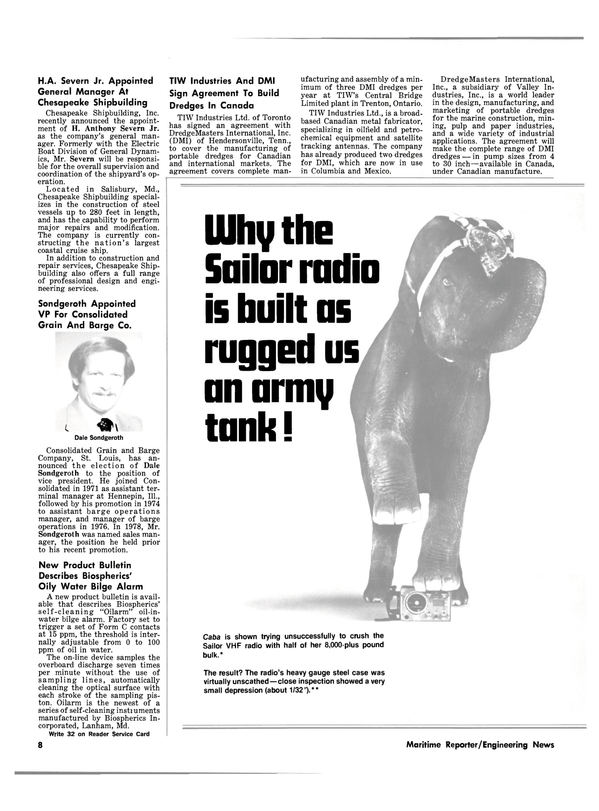