The bulk carrier Pride of Texas (shown above), first of a new class of U.S.-flag merchant ships, was delivered recently by Levingston Shipbuilding Company of Orange, Texas, to her owners, Asco-Falcon Shipping Company of Houston.

The new ship, about 612 feet long with a beam of 93 feet and depth of 50 feet, is designed to carry 36,000 tons of grain or other dry bulk cargoes in trade between U.S. and foreign ports.

Her first cargo was a load of heavy grain shipped from a Gulf Coast port to the People's Republic of China. She is manned by an American crew of 26.

The propulsion plant in the Pride of Texas comprises two RV12-4 Transamerica Delaval Enterprise diesel engines, each with a maximum continuous rating of 8,125 bhp at 450 rpm. The ship achieved 17 knots on sea trials, but in service the engines will be operated at 15,600 bhp, producing a full-load speed of 15.7 knots.

The vessel is classed by the American Bureau of Shipping and certified by the U.S. Coast Guard for unlimited ocean service.

The Pride of Texas is said to be the first dry bulk carrier to be built in the United States specifically for U.S. foreign trade, and also the first to be built with the assistance of construction differential subsidy (CDS) provided by the Maritime Administration.

Under a separate agreement between Levingston Shipbuilding and the Maritime Administration, IHI engineers spent two years working with Levingston engi- neers during the construction of the Pride of Texas, studying ways of t r a n s f e r r i n g Japanese shipbuilding technology to the Texas shipbuilder.

The owner of the three new ships, Asco-Falcon Shipping Company, is a partnership between Ashland Alpha Shipping, Inc. and the Falcon Group of Houston. The vessels will be bareboat-chartered to Equity Carriers, Inc., and operated by Titan Navigation, Inc., both of Houston.

The second ship in the series, the Texas Star, was launched on June 13 this year. (For details on the Pride of Texas launching, see the June 15, 1980 issue of MR/EN.) 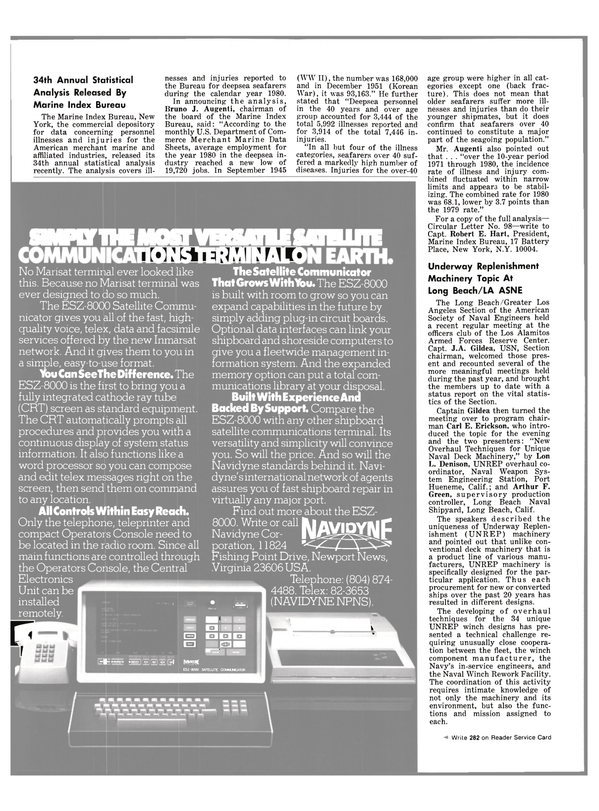