Twin City Shipyard, Inc., St. Paul, Minn., recently laid the keel far a seagoing dredge that will join the fleet of Gulf Coast Trailing Company, Kenner, La., late this year. The new dredge—to be launched under the name Mermentau—is a sister dredge of the Atchafalaya, launched last, year for Gulf Coast Trailing, and which is presently in service in East Coast waters.

The shallow-draft dredge, with a maximum working draft of 14 feet 7 inches, will be used for diverse dredging operations in shallow rivers or for large coastal projects.

The hinged deckhouse has messing and berthing facilities for 16 men.

The Mermentau will be fitted with two dragarms, or trailing suction pipes, mounted on each side of the ship's forward section, and capable of dredging to depths of 65 feet.

Its hopper, occupying most of the midship area, will have a capacity of about 1,300 cubic yards of dredged material.

Upon arrival at the disposal area, the hinged hull will open hydraulically into two halves and dredged material will fall through the gap thus created. If conditions require, as in beach reclamation projects, the dredge pump may be used to remove material from the hopper and pump it ashore. This operation is particularly useful when environmental considerations preclude the use of bottom dumping, Mr. Rossway said. 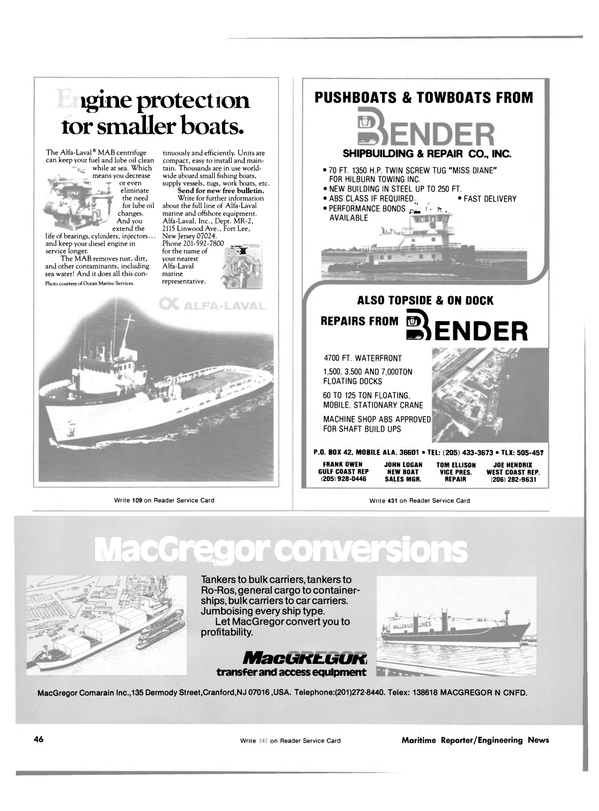