— A Preview — Piraeus, Greece — June 4-9 Representatives of the world's maritime industries will come together in Piraeus, Greece for the Posidonia International Shipping Exhibition to be held June 4 through 9, 1984.

At the last Posidonia Exhibition in 1982, no fewer than 900 exhibitors from 45 countries took part, the highest number in the exhibition's 15 year history. In 1984, a similar number of exhibitors are expected to participate.

Posidonia provides a meeting point for many of the leading figures in the maritime world and the thousands of visitors it attracts include some of the most influential voices in shipping.

The one-day Posidonia Forum, run in conjunction with the weeklong Exhibition, provides a platform from which their voices may be heard, and an opportunity for a meeting of minds on some of the key issues with which the maritime industries are concerned.

Opportunities for discussion on a less formal basis abound, not only on the exhibition stands but also on the many receptions given by individual exhibitors.

Among them, the exhibitors represent every facet of the marine industries, from shipbuilding and marine equipment manufacture to shipbroking, insurance and banking.

By tradition, the Exhibition is formally opened by the Greek Minister of Mercantile Marine. At Posidonia '82, shipping ministers from six other maritime nations were also present and a similar representation is expected this year.

Posidonia '84 will be opened by the present Minister, George Katsifaras, on Monday, June 4. The Exhibition will be open daily until Saturday, June 9. The Forum will take place on Friday, June 8, at the nearby Eugenides Foundation.

The Posidonia International Shipping Exhibition is sponsored by the Greek Ministry of Mercantile Marine, the Municipality of Piraeus, the Union of Greek Shipowners, the Greek Chamber of Shipping, the Association of Shipowners of Greek Passenger Ships, and the London-based Greek Shipping Co-operation Committee. 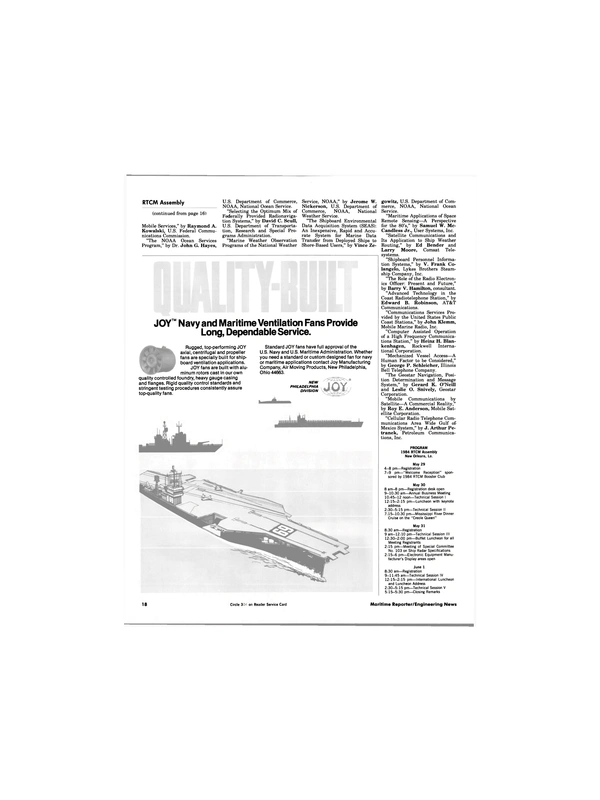 Read POSIDO MIA 5 14 in Pdf, Flash or Html5 edition of May 1984 Maritime Reporter