As part of a comprehensive cost reduction program, American Classic Voyages (AMCV) announced in June that it would eliminate 70 full-time positions form its shore-based staff of 470 full-time personnel. The cuts are also attributed to the fact that the company, which previously held offices in Chicago, 111. and New Orleans, La., decided to combine its subsidiaries under one main location in Sunrise, Fla.

"Although this was a difficult decision, we need to be leaner and more efficient to ensure continued success, AMCV CEO Phil Calian said.

Calian was quick to point out that aggressive sales and marketing efforts have driven demand for AMCV's Hawaii cruises of more than 2,800 net bookings per week for the past eight weeks, a 70 percent increase compared to 1,650 net bookings per week average achieved from January through mid- April. AMCV also reported that its two vessels that are currently operating Hawaiian itineraries, S.S. Independence and ms Patriot, are forecast to sail with a combined load factor of 110 percent and 96 percent, respectively for the summer vacation season.

Hopefully, the company, whose financial performance was recently impacted by both a broad national economic decline and competitive pricing in the leisure industry, will be able to keep these numbers going when it launches its two additional Hawaiian cruise vessels, which are scheduled for delivery sometime during 2003. As reported in the July 2001 edition of MR/EN, (see "Voyage Cancellations, Late Deliveries Continue to Plague Cruise Industry" on page 23), AMCV's president and COO Rod McLeod admitted at a press conference in New York City that, "while the vessels were about 20 percent complete, AMCV is still looking at a delay of about four to nine months." Currently being constructed at Litton Ingalls Shipbuilding in Pascagoula, Miss., the vessels are expected to rejuvenate U.S. cruise ship building. However, the production process at the yard has fallen behind, pushing the original delivery date of January 2003, to an indefinite month during that year.

An AMCV spokesperson acknowledged the difficulties that the company has been having with Litton Ingalls, citing claims from the shipyard for certain interior finish work, which could involve both time delays and interior costs. "We believe these claims are unwarranted and will fully protect our interests under the fixed price contract," the spokesperson said. "We are concerned about the shipyard's progress in its steel fabrication and hull erection, and are closely monitoring this situation." — Regina P. Ciardiello 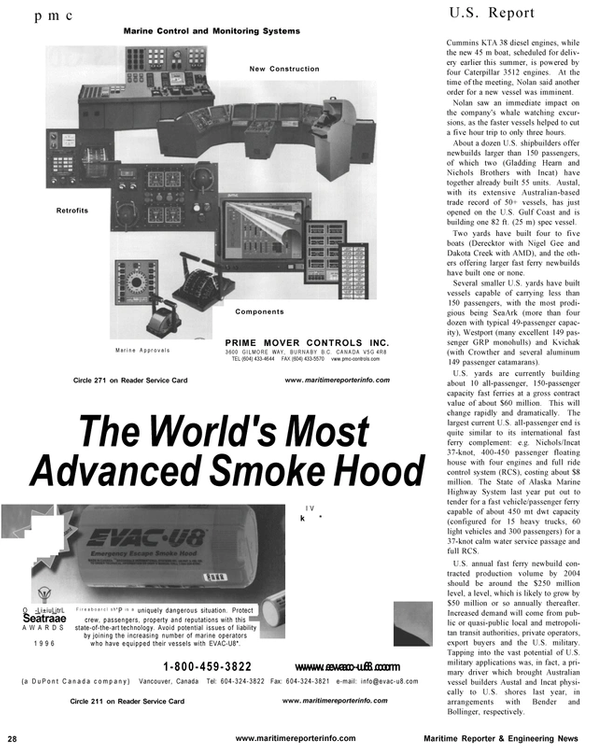