The shiprepair yard of IZAR Ferrol surpassed previous occupancy records recently, as it simultaneously worked on eight vessels. The yard facilities were fully busy and there was no room to accommodate any other vessels at the yard's two dry docks of 1,083 x 164 ft.

One of the vessels, a tanker owned by Spain's CLH, is the first example of the cooperation capacity between the repair yards of Ferrol and Fene (the former Astano), now part of IZAR since the company took over the facilities of Bazan and AESA.

The repair order for the crude oil carrier was awarded to Ferrol, but the vessel had to be docked at Fene due to the high occupancy of Ferrol facilities. It was repaired there by Ferrol workers helped by their Fene's mates.

The Guardian, a 801 ft. (244 m), 95,920 dwt tanker owned by Conoco Shipping, was also visiting Ferrol for a full review of its refrigeration pipe system and general hull repair works.

company Universe Tankships and is currently under progress at the yard's dock No. 3.

The yard is also working in the Larbi Ben M'Hidi, a 856 ft. (261 m) and 70,328-dwt LNG carrier owned by the Algerian company Hyproc. This is a very significant project as the tanker's five cargo tank seats are being strengthened, as well as the propulsion boilers' pipes renewed. A full review of every gas cargo tanks is also being carried in a smaller LNG carrier 656 ft. (200 m) owned by this same company, the A1 Hassi R'Mel. These are repeat orders from the same customer, which in 2000 had the 66,746 dwt LNG carrier Bachir Chinani at the shipyard for nearly four months, for strengthening of the five cargo tank seats, blasting and coating in ballast tanks and hull, and engine room equipment maintenance. A special order has been the pre-delivery review and works on the Navion Odin, a 764 ft.

(233 m) and 96,900-dwt FPSO. The yard is also carrying out maintenance work to the refrigerated compartments of the Semeli, a fishing vessel from the Moroccan owner Lucky Martin Enterprises. 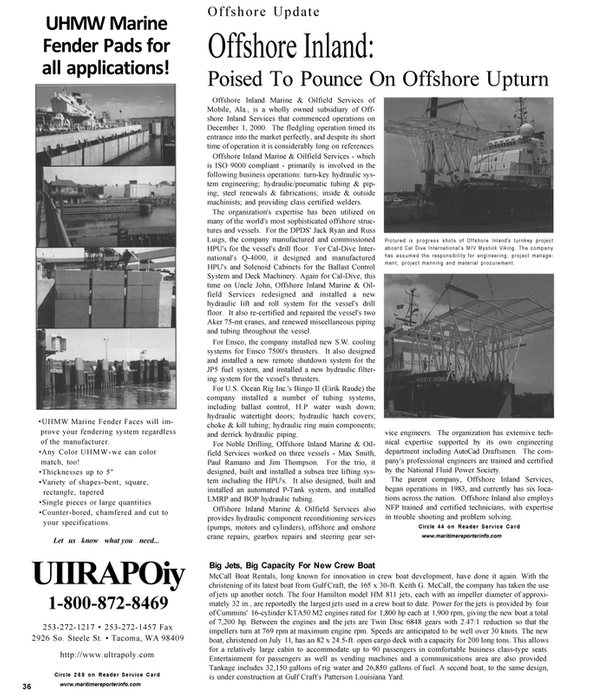