Located in Charleston, S.C., Detyens work on the technically challenging project helped to establish it as a competitive player on the world commercial ship repair market, and helped to reenforce the notion that the LNG market in the U.S. is set for rapid expansion.

"To be successful in the competitive world of ship repair we knew that we would have to start with small commercial repair jobs and work our way up to the larger, more complex jobs," said Loy Stewart, president, Detyens Shipyard.

The renewed ship is on charter from Argent Marine Services to Shell Bermuda Overseas, Ltd.

The Galleoma job, based on its complexity, certainly bears out the claim that Detyens is indeed a formidable competitor.

Following are the technical details of the job which have helped to reestablish the yard.

New Compressed Air System Existing ship service aircompressors were removed with their controls and receivers from their location on the 30- ft. flat in the engine room. A new machinery space was created by using a store room on the 60-ft. flat, and fabrication of a tunnel through the number one and two stability tanks which created a passageway into the main engine room. In the new machinery room three, Ingersoll Rand SSR 60 rotary screw air compressors with dryers and air filters were installed, the existing air receiver was relocated to this space and the installation of one air liquid Nitrogen generation unit was accomplished.

An Intellisys control system was installed, allowing the whole air system to be operated with minimal crew involvement. In addition, the system can be operated remotely from the engine control room.

New Steering Gear To comply with current SOLAS requirements, the existing two ram Lidgerwood steering gear was replaced with a Mitsubishi four-ram electro hydraulic unit. The crosshead was removed from the rudderstock and machined to accommodate the new unit.

The existing system was removed with all its components and foundation. The removal of the stern anchor winch and hawse pipe provided the necessary access for rigging the units in and out.

The electrical and control hook-ups were made in conjunction with the integrated bridge upgrade, allowing for new feedback units for automatic pilots, new emergency steering set up, new angle indicators and feedback back units.

The new installation and modification included the installation of eight new double split drum Pusnes Maritime 400 HW winches, complete with all related bits and chocks and fairleads, which are all upgraded in size, mostly from 12 to 10 inches. All new hydraulic piping was run from the HPU's to the winches.

Integrated Bridge Upgrade All existing navigation and communication equipment was removed, cables were pulled back and some reused for new equipment installation. The entire bridge went through a major overhaul.

A new IBS console was installed, and two new control consoles were mounted on the port and starboard bridge wings.

The main mast was outfitted with two new radars ad wave guides, and all new running lights and antennas. A third radar was mounted on the forward mast.

Route planning and plotting monitor and keyboard was a new installation on the chart table.

steam plant, underwent major work, all of the main steam piping and generator steam lines were hydro-tested, and the main condenser, atmospheric condenser, etc., were all hydro-tested and repaired, as needed.

The LP turbine covers were lifted and the diaphragms removed, and the LP rotor was removed and unshipped through the ballast tank, and shipped to Houston so that it could be dynamically balanced.

Two new Alfa Laval distilling plants and all of the resultant piping and controls were installed, as well as new steam and electric hot water heaters. A new Thorlube system was installed to support the lubrication of the new Thordon strut bearing and stern tube bearings.

Cargo Tank Work The work items related to the cargo tanks are an addition to the experience of Detyens. As the membrane tanks are fragile, special care and precautions were taken while work was going on in the tanks.

A total of three cargo pumps were changed out with their wiring, and the rest of the cargo pump wiring underwent an upgrade, with flexible cryogenic pigtails installed between all of the cargo pumps and the mineral insulated cable power supply cable, together with nitrogen purged and pressurized explosion proof connection boxes where the cable exits the cargo tanks and meets the powercable coming from the cargo control house.

A catwalk was fabricated and installed to allow embarkation from the trunk deck instead of the old configuration, where the embarkation took place from the main deck.

Fire Main & Sprinkler System The existing firemain line ran under the main deck in the port and starboard.

This system was simplified by running a new main line, above deck, from the accommodation to the focs'le, on the port and starboard side slopes from the main lines the system branches off to the relocated fire stations on the trunk deck.

In addition to the firemain module, a new Unitor dry powder firefighting system was installed.

Electric Motors Every electric motor on the vessel, varying from forced draft fan motors to fan motors for galley ventilation, was removed and sent to Excel Apparatus for an overhaul, and reinstalled, aligned and hooked up. 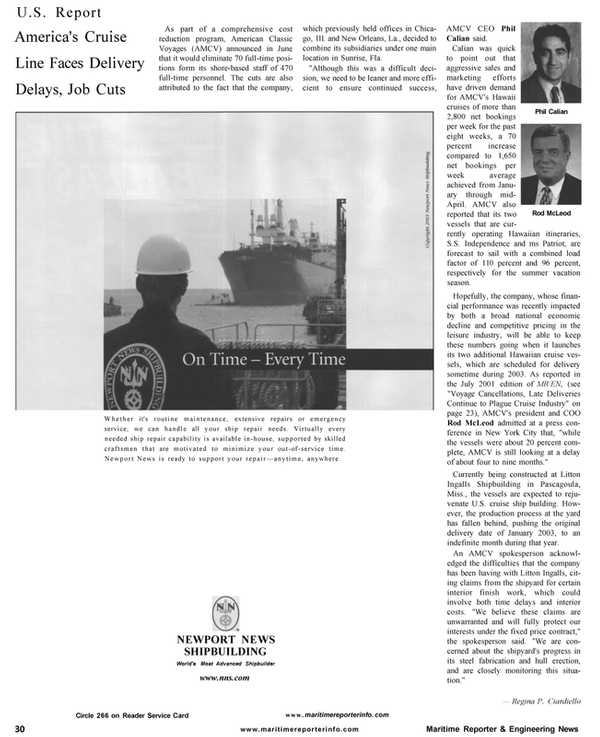