naval operations and the top U.S. Navy officer, last month was reported as recommending that the service stick to its plan to build a multi-billion-dollar class of new destroyers despite a crunch on funds for new warships. "I'd love to have DD-21," Adm. Clark is reported as saying, referring to the Zumwalt- class destroyer designed chiefly to support Marines ashore with long-range firepower.

He called the program central to our transformation effort for the 21st century.

arms programs apparently in danger of being killed in Defense Department strategy reviews under way. On May 31, the Navy announced it was delaying the selection of a team to build as many as 32 of the ships at a combined value of up to $30 billion pending the outcome of the studies.

The rival teams - headed by General Dynamics Corp.'s Bath Iron Works Shipyard and Lockheed Martin Corp. on the one hand and by Litton Industries' Ingalls shipyard division and Raytheon Co. on the other - had been scheduled to make their "best and final" contract proposals to the Navy in early June.

The budget provides for six new ships and 88 naval aircraft next year, three fewer than needed to sustain the approximately 316-ship Navy recommended in the 1997 congressionally mandated Quadrennial Defense Review, the most recent such blueprint.

The budget also provides continued research and development funds for the DD-21, which features electric-drive engines, reduced manning concepts, advanced radar technology and a powerful new gun. At current funding levels, the Navy would shrink to 230 ships over time, not enough to cover the force projection requirements of the United States for the foreseeable future, Clark said. Low orders were also undercutting the defense industrial base.

Austal Breaks Into U.S. Military Austal Limited has signed a premiere contract with the U.S. Marine Corp to charter a 331 ft. (101-m) high speed Theatre Logistics Vessel, which is being chartered by the Third Marine Expeditionary Force (III MEF) for the rapid deployment of Marine battalions and equipment in the Western Pacific.

The contract involves an initial 'proof of concept' period of approximately two months but it is anticipated that this will be extended for a longer period once the vessel demonstrates its ability to meet the Marines' needs.

Operations will be conducted between White Beach Okinawa, Yokosuka Naval Base, Iwakuni, and other ports in Japan.

The vessel will be named Westpac Express in recognition of the Western Pacific region in which it will operate.

The vessel has large bow and stern ramps enabling it to load and unload military vehicles in low infrastructure ports. With strengthened decks, internal hoistable ramps and mezzanine decks the vessel can carry a wide mix of military vehicles.

Circle 1 on Reader Service Card www. maritimereporterinfo. com $30M For Title XI Guarantees The House Committee on Appropriations approved a bill that would provide $30 million for Title XI loan guarantees in Fiscal Year 2002, the highest level of Title XI funding reported out of the House Committee since its Fiscal Year 1998 Appropriations bill. "We're pleased that the Committee has provided $30 million in loan guarantees to fund this vital program," said Allen Walker, president of the Shipbuilders' Council of America. "But that level will only guarantee a small fraction of the $5 billion in projects pending Title XI approval." The bill, which also includes $4 million for administering the program, is expected to be considered on the House floor next week. If approved, the funding provided by the House Committee will be a major victory for supporters of the Title XI program, particularly since the Administration's Fiscal Year 2002 budget request eliminated Title XI funding.

Under the cost-reimbursable contract General Dynamics will provide all required material, services, personnel and facilities to complete the design and development of the AAAV, manufacture and test nine new prototypes, refurbish three early development prototypes, support the Marine Corps initial operational test and evaluation, and prepare for the production phase of the program.

The contract begins the next phase in the development of the world's most advanced amphibious assault vehicle, which started with award of a $200 million- plus demonstration/validation contract to General Dynamics Land Systems in June 1996.

The Marines plan to purchase 1,013 vehicles through fiscal year 2015 to replace the 30-year-old and less capable AAV7s. The new system will weigh 76,000 lbs. when loaded with a crew of three and 17 combat-ready Marines and will be capable of speeds up to 45 mph on land and 25 mph in rough seas. Lowrate initial production of the AAAV is scheduled to begin in 2004, followed by full-rate production in 2006. Its next major event is the service-led early operational assessment this fall. 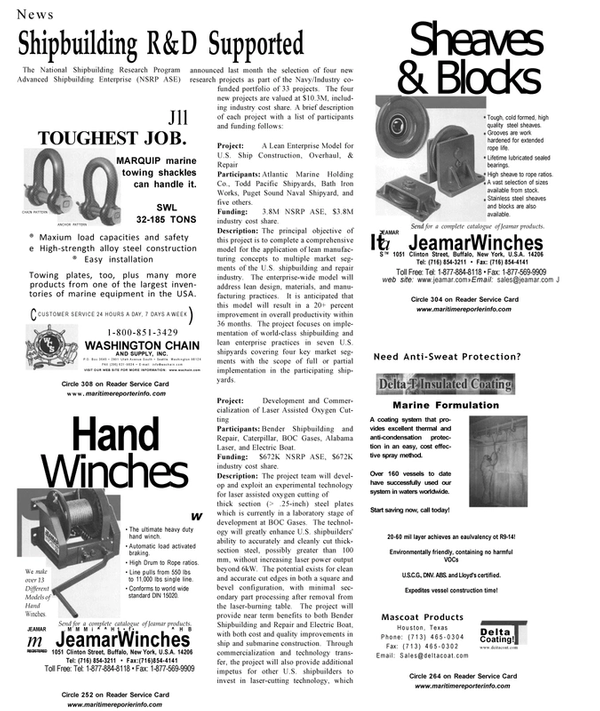