Embodying a multi-tweendeck section for fresh farm produce in a hull otherwise given over to containers, a new generation of vessels for the Israeli fruit and vegetable trade could help shape the future of the palletized reefer sector.

While refrigerated cargo transportation by sea is increasingly gravitating to the containerized mode, Tel Aviv-based marketeer and exporter Agrexco has blended its logistical preference for palletized reefer capacity with a vessel type offering greater cargo scope and flexibility over the long-term.

This pragmatic approach to trading and shipping needs has resulted in a unique design, developed by the Hamburg technical consultancy Schiffko with input from Agrexco, whereby a sixdeck, reefer 'block' is built into a containership hull. Known as the Flexcon 21, the 15,000-dwt type marries an approximate 465,000-cu. ft. bale reefer volume, of a similar order to that of many conventional reeferships, with a total box intake of about 880-TEU.

The two newbuildings will be phased into a weekly service from Ashdod, in Israel, to Marseilles and Barcelona, conveying palletized fruit and vegetables plus containers. On the return run from the western Mediterranean, the ships will earn revenue from shipping cars loaded in the reefer compartments, as well as from carrying all manner of containerized freight. The decision to initially incorporate 100 sockets for reefer containers will provide Agrexco with added shipment scope in its produce range and for providing through-movement logistic solutions.

The vessels will be fitted and equipped to facilitate a subsequent increase in the reefer box complement to a maximum of 260 units.

With the superstructure mounted over the midships reefer section and the funnel casing sitting relatively low right aft, the Flexcon 21 class will cut a new profile in an established trade. Outward indication of a role other than container carrying will be afforded by a big side door built into the starboard shell; the conduit to a highly compartmentalized, temperature-controlled cargo area spread over six deck levels.

Configured into 18 spaces and individual temperature zones, and optimized for fresh produce packed on as many as 4,250 pallets, the non-containerized section will be a platform for both new technology and extensive experience in side loading cargo handling and stowage. The squared-off, pillar-free areas and attendant loading system are also conducive to shipments of automobiles, at up to 500 a time.

Some readers might recall two vessels of a unique design built in the U.K.

nearly 30 years ago for the former British India Steam Navigation Co. The Zaida and Zira were fully insulated, side-loading, multi-deck pallet carriers originally intended for the New Zealand chilled lamb carcass trade from New Zealand to the Middle East, and subsequently switched to the Australia-Japan traffic.

About four years after entering service, the vessels began charters in 1976 to Agrexco for the Israeli Mediterranean traffic, and were subsequently sold to other Israeli interests while retaining the Agrexco charter.

The Tyneside-built sisters remain in Agrexco employ under the names Carmel Exotic and Carmel Topaz, 25 years of continuous engagement in the trade having seen the ships enlarged and modified at various stages for improved pallet intake. Experience gained with the sideloading cargo handling arrangements has colored the latest newbuild project.

The contract award for the construction of the two new vessels of the Flexcon 21 type was made to Portuguese shipbuilder Estaleiros Navais de Viana do Castelo through MPC Munchmeyer Petersen Marine. The Hamburg shipping and investment house will charter the pair to Agrexco for a minimum of 12 years. It is understood that there are options on the construction of further vessels of the class.

Another contributory element to the innovative nature of the project is Agrexco's endorsement of an advance in two-stroke propulsion technology, through the selection of a new design of low-speed diesel using common-rail fuel injection and full electronic control.

The Sulzer RT-flex concept nominated for the ships offers a high degree of operationally flexibility, including lower fuel consumption at part load and reduced exhaust emissions.

Up till the Agrexco fleet program, only one owner worldwide had previously put its name to a newbuild fitted with RT-flex machinery. Each of the MPC-Agrexco vessels will have a camshaftless, seven-cylinder RTflex60C engine, offering a maximum continuous output of 22,470-bhp (16,520-kW) and a service speed of 21- knots.

The consideration given to various engineering and equipment features bearing on the environmental impact of the vessels is indicative of a broader Agrexco ecological agenda, as expressed, for instance, in its encouragement of environmentally-friendly agri-technology. As a partnership between the Israeli government, production and marketing boards, and growers' cooperative, Agrexco is the country's largest exporter of fresh agricultural produce, handling some 300,000-tons per year. 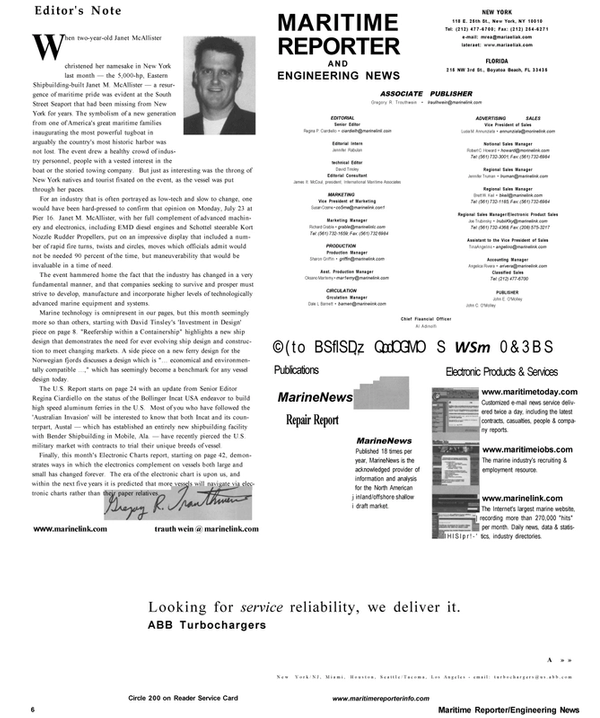 Read Reefership Within A Containership in Pdf, Flash or Html5 edition of August 2001 Maritime Reporter