Predicting business trends in the notoriously fickle marine business is difficult if not impossible. Yet when developments transpire as they have in the fast craft niche of the ferry business, it is difficult to not read the writing on the wall. The business of designing, building, outfitting and operating fast ferries in the United States is set to take off, as increasing pressures from traffic and environmental concerns force more people to the waterways.

U.S. waterborne passenger transport already is large, according to Tim Kelley of Dalton & Kelley, who gave a presentation on the matter at the 17th Fast Ferry Conference, held March 13-15, 2001 in New Orleans. Currently there are 400 operators carrying more than 205 million passengers and 31 million vehicles annually.

The push for speed reaches far beyond the swagger of owning the largest, fastest vessel. Rick Nolan, president of Boston Harbor Cruises, explained at a recent SOCP meeting held at the Massachusetts Maritime Academy that the investment in the company's fast craft fleet helped the company double its business, from 900,000 passengers carried to 1.8 million passengers carried per year, in only three years. "We're very happy with the boats and their effects on our operations," Nolan said. Each of the company's smaller (121 ft. (37 m), 400 passenger) vessels are powered by four Cummins KTA 38 diesel engines, while the new 45 m boat, scheduled for delivery earlier this summer, is powered by four Caterpillar 3512 engines. At the time of the meeting, Nolan said another order for a new vessel was imminent.

Nolan saw an immediate impact on the company's whale watching excursions, as the faster vessels helped to cut a five hour trip to only three hours.

About a dozen U.S. shipbuilders offer newbuilds larger than 150 passengers, of which two (Gladding Hearn and Nichols Brothers with Incat) have together already built 55 units. Austal, with its extensive Australian-based trade record of 50+ vessels, has just opened on the U.S. Gulf Coast and is building one 82 ft. (25 m) spec vessel.

Two yards have built four to five boats (Derecktor with Nigel Gee and Dakota Creek with AMD), and the others offering larger fast ferry newbuilds have built one or none.

Several smaller U.S. yards have built vessels capable of carrying less than 150 passengers, with the most prodigious being SeaArk (more than four dozen with typical 49-passenger capacity), Westport (many excellent 149 passenger GRP monohulls) and Kvichak (with Crowther and several aluminum 149 passenger catamarans).

U.S. yards are currently building about 10 all-passenger, 150-passenger capacity fast ferries at a gross contract value of about $60 million. This will change rapidly and dramatically. The largest current U.S. all-passenger end is quite similar to its international fast ferry complement: e.g. Nichols/Incat 37-knot, 400-450 passenger floating house with four engines and full ride control system (RCS), costing about $8 million. The State of Alaska Marine Highway System last year put out to tender for a fast vehicle/passenger ferry capable of about 450 mt dwt capacity (configured for 15 heavy trucks, 60 light vehicles and 300 passengers) for a 37-knot calm water service passage and full RCS.

U.S. annual fast ferry newbuild contracted production volume by 2004 should be around the $250 million level, a level, which is likely to grow by $50 million or so annually thereafter.

Tapping into the vast potential of U.S.

military applications was, in fact, a primary driver which brought Australian vessel builders Austal and Incat physically to U.S. shores last year, in arrangements with Bender and Bollinger, respectively. 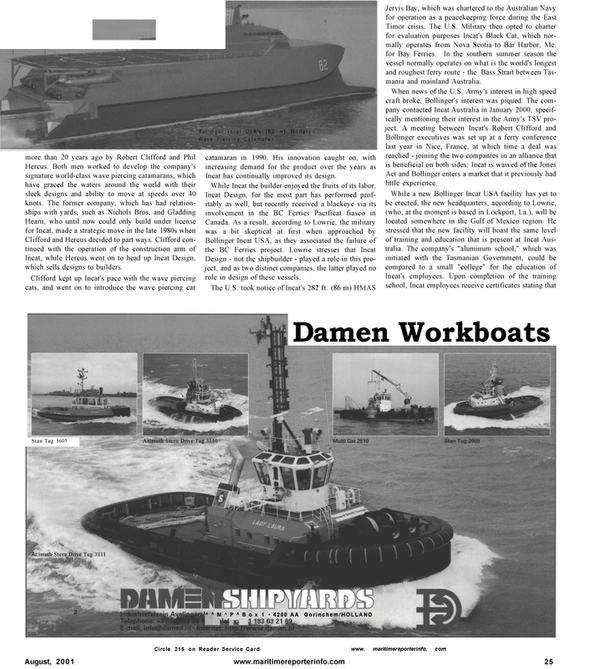