The U.S. Navy was confident that it would successfully raise the Japanese fishing vessel sunk off Hawaii in February by one of its nuclear submarines, and was hopeful of recovering some of the bodies of the nine people killed in the accident. Final preparations were being made at press time. Rear Adm. William Klemm, the officer in charge of the $40 million operation to recover the Ehime Mara, rated the Navy's chances of successfully raising the ship as high as 80 percent.

(610 m) below the surface, carry it in a giant sling 13 n.m. and set it down in shallow 115- ft. (35-m) waters where divers can enter and search for bodies. The Ehime Mara, a trawler used to teach Japanese high school students about the fisheries industry, was about 9 miles (14 km) off Oahu, Hawaii on Feb. 9 when it was rammed by the USS Greeneville during an emergency surfacing drill and sank. Twenty- six people survived but nine people, including four teen-age boys, were never found. The Navy promised their relatives that every attempt would be made to recover their bodies, but Klemm said he expected divers to only find five to seven of the missing people.

The Ehime Mara will probably be moved in late August and divers will likely attempt to recover bodies in September. More than 45 divers will work from a barge anchored over the ship in shallow waters, and they expect to have to force their way through mangled passageways and watertight doors. The 5,991-ton Rockwater 2 has thrusters to keep it stationary during the recovery operation in which remote submersibles will attach 4-in. (10-cm) thick cables to the Ehime Mara.

salvage tug, De Yue is owned by Guangzhou Salvage of China and was selected by Grand Bahama for its high bhp and large bunker capacity.

The 20,000 nm tow is expected to take 170 days with an average tow speed of approximately five knots. Arrival in the Bahamas is expected around Christmas 2001. The routing, which is mapped to avoid major weather patterns in each of the Pacific, Indian and Atlantic Oceans, allows for stop-offs for bunkering in four locations, currently intended to be Davao or Cebu, Dijbouti or Singapore, Suez or Cape Town, and Gibraltar or Fortaleza.

Preparations are currently underway at the shipyard to prepare for the arrival of the dock and this work will be going on in conjunction with a major investment in the rest of the facilities at the yard to cope with the expected increase in workload that the new dock will generate. 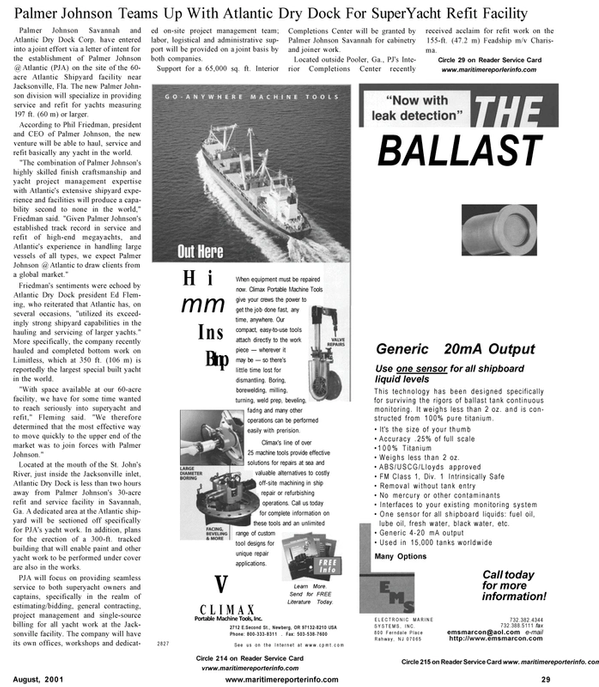