A number of factors, including instability in world oil markets at times, the return of bitter cold winters to the energy-hungry U.S. Northeast, and advances in the collection.

According to the latest statistics from Lloyd's Register, up to 50 ships over the next 10 years will be required for delivery, given the LNG maintains its current eight percent growth rate. As the average 138.000 cu. m. LNG tanker is going for about $150 million, according to World Gas Intelligence, this makes an approximate market of $7.5 billion over the next decade, on the LNG side alone.

A less scientific, yet sometimes equally effective, means to measure a market's potential is the "buzz" given a particular topic, whether it be via company information releases or the conference circuit.

Not that gas does not have its challenges. Directly following the September 11 terrorist attacks in the US, several LNG receiving facilities were temporarily closed, as they were seen as an imminent risk. Similarly, local opposition to building, reopening or expanding LNG receiving facilities has iced some current projects, as options are weighed.

Regardless of market fluctuations, the need for gas is on the rise. Figure 1 shows the most likely worldwide growth of LNG import capacity over the next 10 years.

On the ensuing pages, MR/EN looks in on some interesting ship and equipment developments. 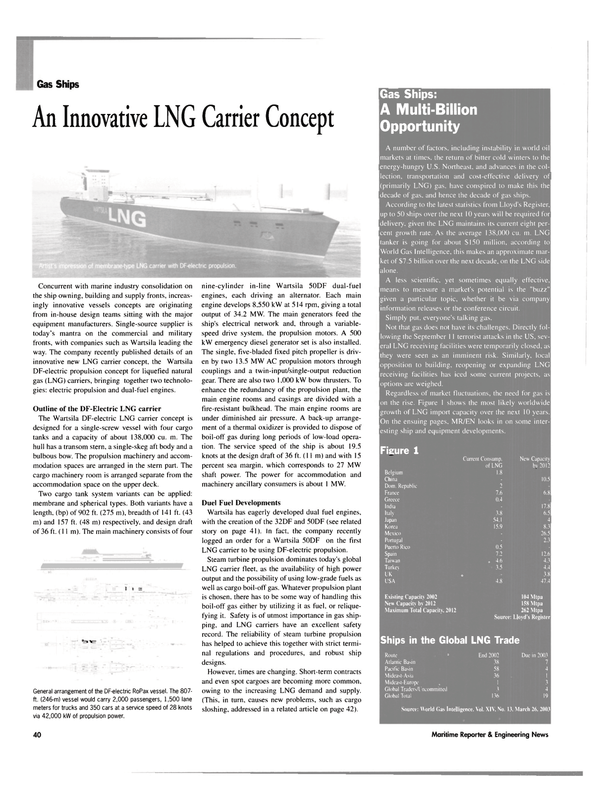 Read A Multi-Billion Opportunity in Pdf, Flash or Html5 edition of May 2003 Maritime Reporter