A new arrival in the North Sea has provided Hyundai Heavy Industries, the world's largest shipbuilder, with its debut reference in the RoPax market, approximately 25 years on from the South Korean yard's construction of the operationally acclaimed Searunner RoRo trailership series. As the first of two Stena Seamaster-class newbuilds, the 43,500-gt Stena Britannica has been phased into the long-established ferry route linking the U.K. east coast port of Harwich with the Hook of Holland, at the seaward end of Rotterdam's New Waterway. Commercially significant in realizing a 20 percent advance in freight intake and 50 percent increase in capacity relative to the modern, IZAR-built RoPax of the same name which she has superseded, Stena Britannica also denotes an industrial milestone for Hyundai, as the latter's first large passenger vessel. The 22-knot, drivethrough design provides unobstructed standing for 3,400-lane m of freight vehicles and units on four decks, with extra flexibility conferred by a lightweight, hoistable car deck dimensioned for 120 autos. The standard and quality of finish of the passenger spaces and cabin accommodation, along with the yard's convincing contractual performance, give a solid foundation to Hyundai's drive to raise its profile in the passenger vessel market. 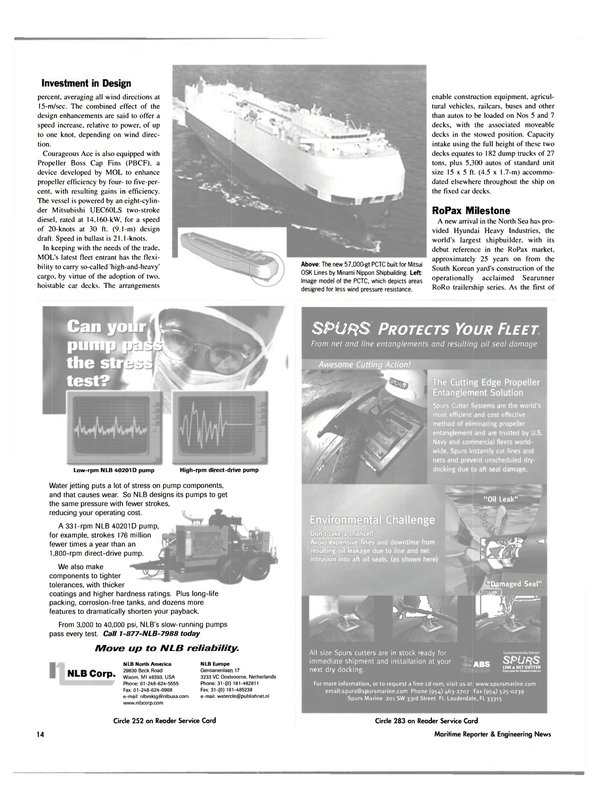 Read RoPax Milestone in Pdf, Flash or Html5 edition of May 2003 Maritime Reporter