The Los Angeles Fire Department (LAFD) has accepted its new fireboat, L.A. Fireboat 2, which is the largest in the U.S. according to its length of 105 ft.

(32 m) and a fire-fighting capacity of more than 10,300 cu. m. /hr. Built to replace the 75-year-old Ralph J. Scott, it was designed by Robert Allan Ltd. And constructed in 18 months by Nichols Brothers Boat Builders.

The basic principle of this ship was developed by Voith Schiffstechnik, Germany and it is based on the Voith Water Tractor. During fire fighting the pumps are running with 70 percent of the main engine power and the remaining 30% are sufficient for the vessel to maintain an exact position.

The vessel has a unique hull form developed by Robert Allan Ltd. in order to create very low wake wash profile at medium speed patrol operations within the Port of Los Angeles. According to Doug Moore, chief engineer at the LAFD's Fire Station #112, where the vessel will be home-ported, "The new fireboat was able to match the LAFD's needs for a design that incorporates the abilities of an escort tug with the latest in firefighting technologies." Moore, who also served as the fireboat's project manager, added that he was equally impressed with the vessel's efficient fuel savings, which can be attributed to its unique hull form and Detroit Diesel engines. "The cruising fuel economy of this vessel is twice than what we expected," he said. A radio-controlled model was constructed and tested in order to verify that the wake profile was acceptable, and also to verify speed and maneuverability characteristics. The forward hull is typical of a VSP propelled vessel, however the aft end has a quite different form, more reminiscent of the style of high-performance ASD tugs for which the designers are noted.

Propulsion and steering control are provided by twin Voith cycloidal propellers, Model 26 Gil/165, provided by Voith Schiffstechnik, each driven by an MTU/Detroit Diesel Model 12V4000 diesel engine, rated 1,800 bhp (1,343 kW) at 1,800 rpm, which also drive a fire pump through a front end PTO. In addition, a pair of MTU/Detroit Diesel 8V- 4000 pump engines each drives two fire pumps. All machinery is resiliently mounted for minimization of noise and vibration transmission.

The fire-fighting system delivers a total of 36,000 U.S. gpm at the system operating pressures of approximately 10 bar (136,080 1pm or 8,165 cu. m. /hr.) delivered from a total of six pumps to all the monitors. The entire fire-fighting pump and monitor system was provided by UnitorAB (formerly Svenska Skum AB).

The main piping is a major design feature, prominently mounted in a ring around the upper boundary of the deckhouse, with the monitors mounted directly above. The wheelhouse is designed to provide maximum possible all around visibility, with excellent overhead visibility through large visor windows. To keep a clear view, it is outfitted with a Wynn wiping system. 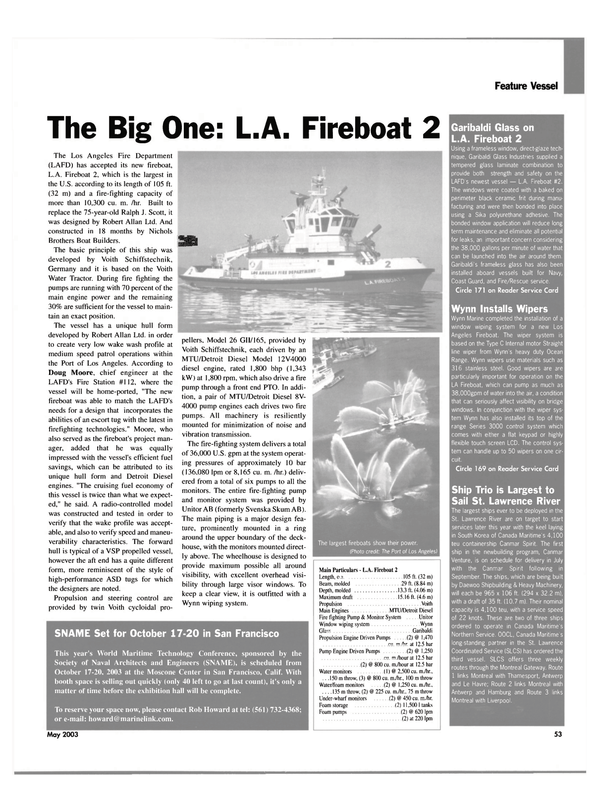 Read The Big One: L.A. Fireboat 2 in Pdf, Flash or Html5 edition of May 2003 Maritime Reporter