The Coast Guard will purchase up to 700 new Defender Class Response Boats from SAFE Boats International of Port Orchard, Wash. The new Defender Class boats, which will be used in homeland security missions, will replace nearly 300 non-standard shore based boats and provide a standardized platform for the Coast Guard's new Maritime Safety and Security Teams (MSST's) which were established as a result of the September 11 terrorist attacks. The Coast Guard selected SAFE Boats International to manufacture the boats after a two-phased process. Three vendors were selected from written proposals to produce a prototype of their design. The total value of the contract is $145 million. Each boat will cost approximately $180,000. The 25-ft.

The boats have increased maneuverability and are capable of speeds in excess of 40 knots (46 mph) with twin outboard engines. The full cabin provides crew protection from the elements and is equipped with a state of the art navigation system, heater, shock mitigating seats and a communication system capable of communicating with other Federal, State and Local Homeland Security partners. The boat is also designed to be transportable by road or by C-130 aircraft." Delivery of the first boat is expected in July 2003 and will continue to arrive at Coast Guard units at a minimum of two per week. The Coast Guard will purchase up to 700 boats as needed over the next seven years and represents the largest single acquisition of identical response craft ever purchased by the Coast Guard. 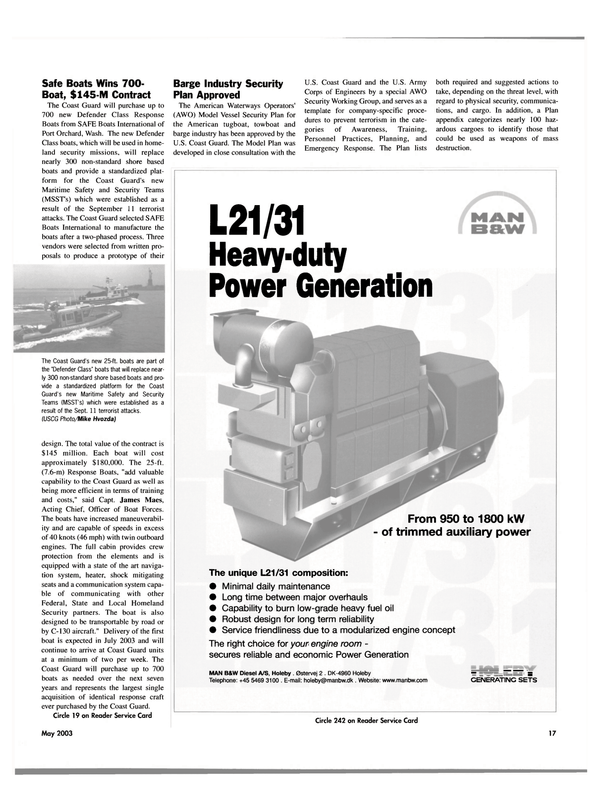