The company was established in 1955 when James D. Rosborough began retrieving former Grand Banks fishing schooners from Newfoundland and rebuilding them into Sailing Yachts, Motor Sailors, and Charter vessels for the U.S. market. Sine then, the company has gone through many decades of evolution and keeping up with market demands and operator demographics. Regrouping its focus from refurbishing fishing schooners, to designing and building character wooden sailing vessels from scratch to mostly traditional configurations of sails to square riggers, Rosborough has since gained a reputation as a semi custom builder tailoring its products to each customer's demand — an attitude that was instilled into the second — and now third generation of Rosboroughs who the company.

Primary areas of supply are to the entire USA, Caribbean, Bahamas, Northwest Territories, and Canada.

Rosborough Boats has built many different sizes and use specific craft throughout its 48-year history.

Recently, the company's primary vessels offered are in the 25 ft.- to 30-ft. range with the most popular being the RF 246. RF, which stands for Rosborough Fiberglass is indicative of when Rosborough changed its focus from wood to fiberglass, and the 246 represents the design length of the vessel's 24.6 ft. In reality, the RF 246 measures 25 ft. in length overall on deck as a result of when tooling the plug for molds seemed to work better with the hull form.

Building production for this craft allows for 45 uriits/yr., for which the Fisheries and Oceans Police division of the Canadian Coast Guard now have a fleet of 40.

Rosborough has also gotten its hands dirty with a new generation, high speed Rigid Hull Inflatable craft, which is trademarked Rough Water. Now in final stages of development, the first four of these craft have been put into service by the Canadian Government as a Patrol, Surveillance, and Boarding craft for Fisheries Protection and Coast Line Security. 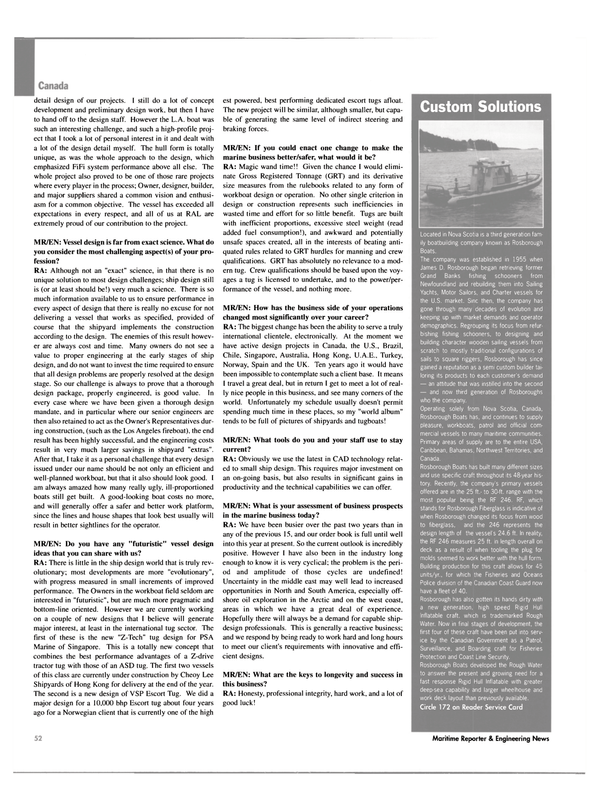 Read Custom Solutions in Pdf, Flash or Html5 edition of May 2003 Maritime Reporter