Service Pack 3 of the Tribon M2 Shipbuilding system was released in early April, a version that includes further improved production information in the Assembly and Weld Planning applications and the new function Recording of Walk Tiirough Paths in the Design Manager application. A new method for calculation of weld joints works more than 10 times faster than the previous version. The new version of the Assembly Planning application is delivered with Service Pack 3. Tribon M2 Assembly Planning helps define the vessel build strategy and create assembly production information, and also supports various activities in the work preparation and production engineering area. Both the production structure of a vessel, and the assembly structure, can be defined and maintained with Assembly Planning.

Weld Planning also has a new user interface. A new method for calculation of weld joints works more than 10 times faster than the previous version. This new solution, based on the Tribon core technology, replaces the standard solid geometry method previously used.

Recording of Walk Through Paths A new function in the Tribon M2 Design Manager application is the Recording of Walk Through Paths. A walk-through in the ship model (Tribon PIM) can now easily be recorded and replayed. The recording is stored as a standard avi file format. The recorded walk through path can then easily be distributed to other design departments and offices to be displayed which simplifies the design reviews.

Walk-throughs can be used to present a ship arrangement in an efficient way. 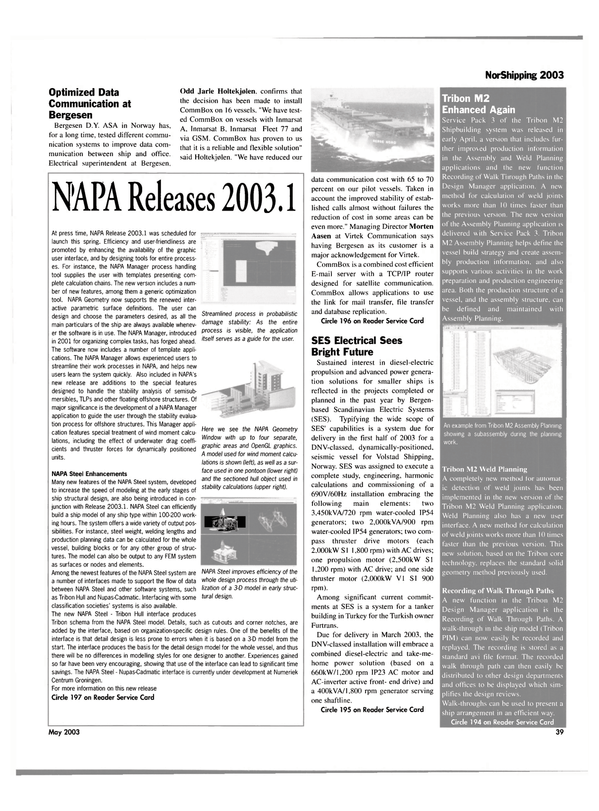