Rolls-Royce has introduced an innovative "pulling tanker" design to fill a need in the small (3,000 to 16,000 dwt) tanker niche, a niche which the company suspects will have to be filled with 1,000 vessels worldwide in the coming five years. In fact, there are strong indications that an order from a not yetnamed owner is coming soon, possibly announced before or during this year's Nor-Shipping event in Oslo in early June, according to company officials.

The heart of the concept — which was started about 1.5 years ago, as pressure mounted on owners in the wake of Erika — are twin Ulstein Aquamaster Azipull thrusters with pulling propellers, in a compact arrangement using simple mechanical transmission from a pair of medium speed diesel engines, that can also supply the electrical services and cargo pump loads. The concept carries on the trend towards minimized engine room spaces and maximized, flexible cargo space arrangements, allowing owners to maximize profitability, said Gunnar Nyland, Rolls-Royce corporate research. In this case, Rolls-Royce claims that the power configuration allows for an additional five to seven percent more cargo space than would usually be offered in a ship of this size range.

The rudder effect of the Azipull thruster and the high side force it can generate in relation to helm angle is designed to allow the hull advantages to be retained while adding the benefits of azimuth thrusters for maneuvering.

Rolls-Royce carried out a full program of CFD analysis combined with tank testing to ensure that the NVCDesign vessels meet course stability requirements, while reaping the benefit of the new hull design. The design features two totally separate engines and propulsion systems. However, Rolls- Royce is confident that the combination of quality ownership and legislative pressure from around the globe will make its highly redundant vessel attractive and economical in the long haul.

Circle 97 on Reader Service Card Scandinavian Cruise Ships Feature RR Propulsion Rolls-Royce's Kamewa Ulstein propeller systems will be featured on three separate cruise routes in the Scandinavian market. For each ship, the Rolls-Royce propeller system includes the shafting, hydraulic pitch setting system, digital electronic con- trols and the operator stations on the bridge. Birka Line has ordered the system for its cruise vessel being built at Aker Finnyards. The 580-ft. (177-m) vessel will have a twin screw propulsion system with Kamewa Ulstein Ice Class 1A Super propellers, turned by main engines to give a maximum speed of about 21 knots. Each 15-ft. (4.6-m) diameter stainless steel four-blade propeller will transmit up to 11,400 kW, and there are strict requirements to minimize pressure pulses to cut noise and vibration. The system will also be featured on a 73,500-gt cruise ferry being built for Color Line, and a 40,000-ton, 636-ft. (194-m) vessel being built for Tallink by Aker Finnyards. 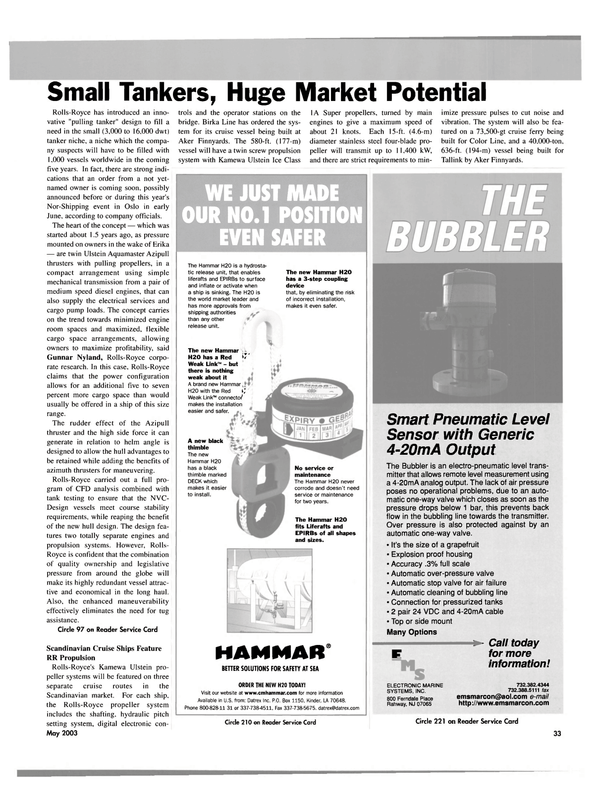