DNV Maritime: Changing of the Guard

Rapid-fire change is the only thing that stays the same in today's increasingly regulation-heavy, litigious maritime industry. Norway's Det Norske Veritas is there to help smooth out the curves.

It is no overstatement to say that the marine business is undergoing one of the most dramatic wholesale changes in a generation. With political pressure mounting from disasters such as Prestige and security concerns heightened due to the threat of terrorism, no stone has been left unturned.

Classification societies in particular are under increasing pressure to perform, as they are often the first ones in the eye of the maelstrom of public opinion when an accident occurs.

Norway's Det Norske Veritas is one of the world's leading classification societies. Although fourth on the list of the world's largest class societies (classing 16 percent of the world's fleet, or 93.3 million grt), the organization is highly regarded for its technical expertise and commitment to environmental issues.

Recently Tor Svensen took over the helm of DNV, and while he has no immediate plans to change its current strategy, he wants to increase the global credibility of classification societies, particularly that of DNV.

At face value, it is worthy to note that less than half of DNV's overall business, (44 percent to be precise), is from the maritime industry, with certification, offshore work and consulting making up the other 50-plus percent.

But Norway's deep cultural affinity for the sea and the unique relationship of the Norwegian cluster help ensure that DNV is on the cutting edge of the business. DNV classes more than 70 percent of the Norwegian fleet, but this is a shrinking business as owners move headquarters to more economi- cally friendly environs. While the home offshore market is stagnant, the company continues to grow its offshore operations through expansion, recently opening a 10-person office in Angola to service this burgeoning region.

Svensen emphasizes that the organization's strategy and commitment to quality, performance and service remain competitive factors for increased global activity. "There is no doubt that there is political pressure, stemming from a series of major maritime disasters including the Prestige sinking, to tighten regulations and means of enforcement.

Unless we take care, this trend may change the relationship between Class and the international bodies. We need to re-inforce the role of class to regain confidence.

This will remain an important task for DNV and for all of IACS." Bad Ships = Bad Business Talk around the world, whether in the offices of DNV or the recent conferences at the Intertanko Tanker Convention, centers on the "elimination of substandard ships." While it could be argued that much of such talk in the past has been idle chatter, DNV seems poised to step up and help lead the way, accepting the responsibility of its unique role and its determination above all to eradicate sub-standard ships.

Towards this end, DNV is engaged in several projects aimed at harmonizing Class rules. Through IACS, the principles for establishing common scantlings are being developed. A smaller group of IACS members, consisting of Lloyd's Register, American Bureau of Shipping and DNV, is harmonizing the structural requirements for tankers. More common rules will prevent competition on basic safety standards.

The new head of maritime believes DNV is likely to become a more diversified company over the next decade, providing a wider portfolio of services. In turn, this will demand an ability to implement changes, swiftly, effectively and with precision.

"Prolonged decision-making can undermine Class quality, performance, service, and market positions," he says, adding "DNV's greatest advantages lie in the field of technology — where it has held a leading position for several decades — and its global presence, which includes strong units in Asia and the Americas." The ability to see the whole picture in an international perspective is partly why Svensen is now heading DNV's Maritime business unit. Educated as a naval architect, he has extensive experience in research, engineering and ship design.

Since 1993 he has worked his way up through DNV's system — from section manager in advisory services — to regional manager for South East Asia in 1996, and finally as Technical Director.

The j ob in Singapore, in particular, was where he earned his stripes: in an extremely competitive climate, DNV made some significant market inroads during Svensen's period.

Security is the Word DNV, like most every other organization serving the maritime market, is busy finding the angle to penetrate the fast-growing maritime security demand.

July 1. 2004 is the date circled on calendars around the globe, as this is when the ISPS (International Ship & Port Facility Security) Code is set to enter force, commanding "certification" for a mind numbing estimate of 40,000 ships and up to 10,000 port facilities. This, combined with the patchwork of national and regional regulations, means that vessel owners and facility operators will, more than ever, depend on organizations such as classification societies to help them consume, digest and live up to the new rules. To that end, DNV is currently training more than 100 surveyors to help customers meet the deadline. 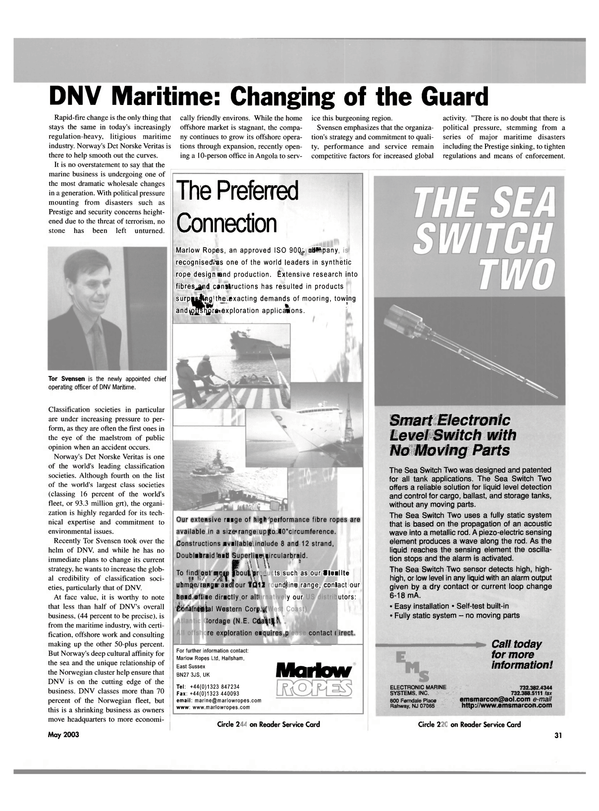 Read DNV Maritime: Changing of the Guard in Pdf, Flash or Html5 edition of May 2003 Maritime Reporter