Sitting in scenic Alesund. Norway, Maritime Partners, which sells a wide variety of rescue and patrol craft, has the advantage of geography in more ways than one. Aesthetically, Alesund could be considered one of the most beautiful places in the world, with German-influenced architecture set on the rugged, fjord-laden Norwegian west coast.

Aesthetics aside. Maritime Partners sits in the middle of a cradle of Norwegian maritime technology, allowing it to tap an enviable base of experience while enjoying the benefits of international operations.

Maritime Partners, started in 1994, has an annual turnover of $20 million and delivered 70 vessels in 2002. In 1999 it acquired well-known brands such as Alusafe, Seabear and Weedo, positioning it to prosper in the years to come, particularly with the acceleration of fast, versatile craft for maritime security operations. The company designs and builds boats ranging from 16 to 82 ft. (5 to 25 m), and is an aluminum specialist.

The vessels are largely of a standard design with modifications to meet a specific customer's needs, but custom build options are also available. Most offer a diesel/waterjet configuration, and the designs, according to Arne K. Dybvik.

sales manager, are flexible enough to allow a range of different manufacturer configurations, with Volvo/Kamewa, Yanmar/Hamilton and Caterpillar/ Castoldi combinations accounting for a majority of the orders. The patrol craft market seems a natural extension for the company, and while the bulk of recent deliveries have been for commercial companies, Peder R. Myklebust. the company's managing director, admitted that interest is growing quickly. In mid- March, in fact, the company had plans to travel to the U.S. soon to explore the possibility of working with a U.S. company to build Maritime Partner designs, he said. A recent delivery for the Norwegian Home Defense highlights the possibilities. The Alusafe 1300 Mk II is a multi-purpose defense vessel with a 280-n.m. range and a top speed of more than 40 knots. The boat sleeps four and is outfitted with a complement of electronics to full military specification.

Maritime Reporter had the opportunity to jump aboard SHV 104 Kvitsoy for a ride which fully confirmed the company claims, as the boat — powered by a pair of 450-hp Volvo Penta's driving Kamewa K28 waterjets - featured excellent acceleration and maneuverability.

Kvitsoy is the first of three vessels for the Norwegian Home Guard.

While the patrol craft market is enticing new business, the open type rescue boats is the company's "bread and butter," accounting for 50 deliveries in 2002, said Dybvik. The MP 741 Springer, pictured left, is a solid example of a vessel of this type. Late last year the company logged a breakthrough order, as Langsten Shipyard (part of the Aker Group) together with the ship owner placed an order with Maritime Partner for Daughter Craft, Fast Rescue Craft and a tug to hold offshore oil booms. This state-of-the-art stand-by vessel is chartered to Statoil for the Haltenbanken Area to perform stand-by duty for the offshore installations there.

It will be on station 365 days a year and need well proven, reliable equipment to maintain operational readiness at all times. That Maritime Partners is chosen as supplier for this newbuilding gives a stamp of quality to the products. Simon Mokster is one of the pioneers in the stand-by service in the North Sea. The equipment chosen is one MP-1111 WJ FRDC, a waterjet driven daughter craft, one MP-741 Springer fast rescue boat and one Weedo 710 Tug. The FRDC is a highly specified version of the MP-1111 & 121 1 family, which have been delivered in several versions since 1995. 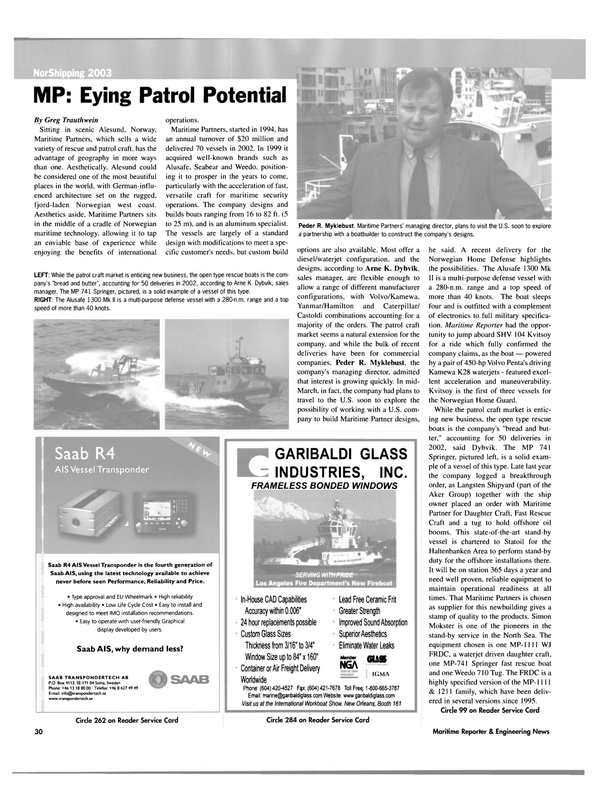