At the beginning of 2000, Damen Shipyards was awarded the contract for the design and construction of five Disaster Prevention Vessels for the Rotterdam Port Authorities. With four of these specialized vessels designed for use inshore in the Rotterdam Port area, the fifth vessel (and slightly larger) of the series will be used in the offshore approach area of the Port of Rotterdam.

Normally, the vessel will operate with a crew of three, but if disaster should occur, the vessel can take up to eight persons aboard. Classed by LR with the descriptive note "Specially strengthened for navigating in RIZA code R conditions," the vessel meets the requirements of the Netherlands Shipping Inspectorate, such as the ADNR regulations for vessels coming alongside vessels carrying dangerous goods while loading and unloading. The hull is of a round bilge design strengthened by a combined longitudinal and transverse framing system. In the design process special attention has been paid to minimize sound levels and minimization of the generation of waves. Also, the ability to execute patrol activities at very low speeds for prolonged periods of time was an important factor in the design of the vessels. The wheelhouse has been designed to act as a command center in the event of Disaster Prevention Operations. Its large front, side, aft and sky windows provide maximum visibility.

Controls have been divided over two controls, one forward and one aft with the forward console comprised of three sections (port, center, starboard) in which the various controls, navigation and communication equipment and fire fighting control equipment are placed.

The vessel is fitted with two Lips controllable pitch propellers each driven by a resiliently mounted Caterpillar 3412E TA (electronic) engine via a Reintjes LAF 562 reduction gearbox. Auxiliary power is generated by two (naturally aspirated) Caterpillar 3304 B engines, each developing 63 kVa, and a hydraulically driven (200 kW) bowthruster is capable of generating a side thrust of max. 2.2 ton.

Forward of the (propulsion) engine room a pump room is situated, in which two fire fighting sets are fitted comprised of Caterpillar 3406 engines driving 900 cu. m. Nijhuis FiFi pumps at 13 bar each. The FiFi lines are connected to four hydraulically remote controlled monitors, two of which are fitted in front of the wheelhouse and are rated 450 cu.

m/hr. each. In addition, the vessel's anchoring DP system may be activated during fire fighting operations for station keeping. The fire-fighting monitors, fire-fighting connections are provided at the fore and aft deck fitted in heated enclosures.

A high level of automation can be found on board, such as a Praxis automation technology system comprising four TFT screens on the bridge for remote control of all major systems. 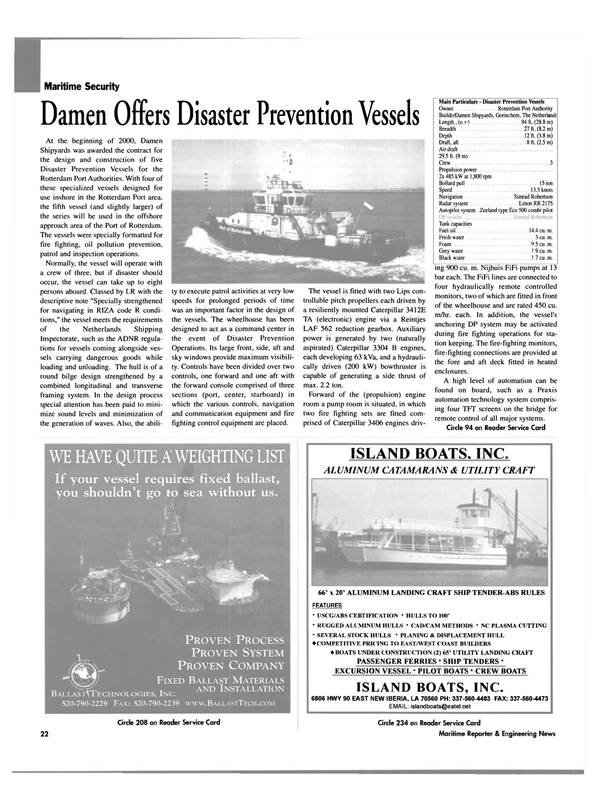