Frontline Continues to Blaze a Path

Plenty of companies talk the talk.

A large, young, double hull fleet, which is a market trend setter is an apt desire for most any company that carries oil from point A to B.

Frontline, has sped from zero to 60 at record pace.

Hatched in 1996 over frustration stemming from carrying cargo based on oil major's terms, Frontline sought to become a lightning rod for consolidation, changing the very foundation of how the tanker business was traditionally run.

Before Frontline was conceived, the tanker market was fragmented, to say the least. Of the 450 VLCCs 10 years ago, Frontline CFO, Tom E. Jebsen, estimates that 100 vessels were owned by one-vessel operations. Today, that picture is simplified, with approximately 70 owners total. Frontline started in the mid 1990s with six ships, but rapidly grew to its fleet of 69 VLCC and Suezmax ships today (40 VLCCs plus one newbuild, 21 Suezmax and eight Suezmax OBOs). The company controls a cumulative 17.2 million dwt, and its fleet, 71 percent of which is double-hulled, averages just 6.8 years old.

Frontline's strategy centers on the inherent purchasing power of operating a large versus a small fleet, and the realizing cost savings through the outsourcing of operations such as ship management. Despite it acquisitive past, and the current (at the time of MR/EN's visit to Frontline's Oslo office in mid-March 2003) VLCC dayrate of $100,000, the company is currently holding steady, as it digests how world events, including the war in Iraq, the strike in Venezuela, and the effects of the Prestige sinking on scrapping rates, will effect the market. In particular, it notes the current world fleet and newbuild orderbook: VLCC ULCC Suezmax Feb 14,2002 433 25 285 On Order (2001-2006) 76 1 63 Noting that the company commands a 10 percent market share in two major segments, Jebsen said: "I think (right now) we are big enough, but he did admit that, "at any time, we are looking" at a couple of companies to buy." It's position as consolidator is not the only factor that sets Frontline apart. Despite strong ties to the Norwegian home market, the company is based in Bermuda. 'Any shipowner should leave any 'normal' European tax scheme," Jebsen said, noting that Bermuda's tax-free environment was essential to Frontline competing against Greek and Singapore ship owners. 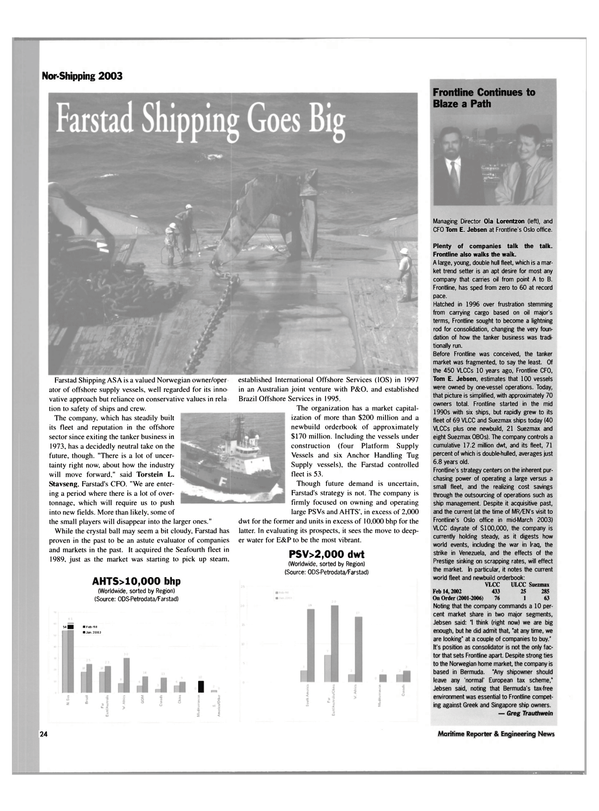 Read Frontline Continues to Blaze a Path in Pdf, Flash or Html5 edition of May 2003 Maritime Reporter