The Best of Both Worlds

Oslo-based Aker Kvaerner Yards is irony in action. It serves an ancient industry dominated by older generation, yet is led by a fresh faced young executive. It prospers in a capital and equipment intensive market, yet is helping to re-define some of these relationships via the Internet. The organization is the largest shipbuilding consortium in Europe, yet good prospects for growth lie in smaller, compact yards.

— by Greg Trauthwein Upon first meeting the new leader of Aker Kvaerner Yards, the initial thought is "Good God, this guy is successful at a young age!" Once the cover of the book is read, though, it is increasingly easy to see why Karl Erik Kjelstad, 36, was tapped to lead one of the top shipbuilding consortiums in the world. Aker Kvaerner Yards is a collection of 16 yards and approximately 16,500 employees that generates an annual turnover of nearly $3 billion.

Kjelstad, officially named to the post of President and CEO on February 4, 2003, has occupied these positions in an acting capacity since early January 2002 when the previous incumbent. Leif- Arne Eangtfy, left to become president and CEO of Aker RGI.

They are highly specialized, with a range of deliveries, which includes cruiseships, containerships, RoRo vessels and offshore service vessels, as well as traditional and fast ferries.

A Clear, But Not an Easy Path The strategy to profitability at Aker Kvaerner Yards lies in the diversity of its talents and the breadth of its reach. The company — which enjoys an approximate 20 percent return on capital — is in the business of building high-value niche vessels. With 16 yards, it can target most niches, helping to effectively smooth out some of the cycles inherent in the marine business. The problem today: there are few if any strong markets, according to Kjelstad, a situation he sees improving in the 2004/2005 timeframe. It can be sure that top business schools are not modeling business success today as that of an equipment and capital-intensive venture in Norway.

Norwegians, generally very forthcoming with on-target self-analysis, make no secret of the fact that soaring costs in Norway, including labor, is driving business out of the country.

Despite this, there is an inherent experience and base of knowledge — that cannot be reproduced within a generation — that keeps the customers coming back. Diversified international companies such as Aker Kvaerner Yards are now trying to strike a delicate balance that integrates the financial benefits outside the country with the technical expertise inside.

A perfect example of this is the company's shipyard in Romania, Aker Tulcea.

Acquired by Aker Yards in 2001, the shipyard has been utilized liberally to build hulls for the new wave of massive offshore vessels, sending them to the Norwegian facilities for final outfitting and delivery.

Another good example of investment outside the country is the company's venture in Brazil, Promar.

Promar was acquired, initially, to win new orders for offshore vessels from U.S. giant Tidewater. Now that the operation is integrated into the company fold and running, it is seen as a potential model of efficiency. "What we want to do in Brazil is to take the Norwegian model and incorporate our plan ... a small compact yard with no heavy lifts," said Kjelstad.

The Philadelphia Shipyard is another sign of the company's strategy towards expanding markets, albeit much different f r om the previous two examples. The Philadelphia shipyard — which occupies more than 114 acres of the former Philadelphia Naval Shipyard — is currently building three containerships, (two of them ordered and one on spec) with the first due for delivery to Matson Navigation in early June. While the containership market is interesting, the real target for this yard will be the Jones Act tanker fleet, though Kjelstad admits that he hopes to avoid building tankers on spec.

Another big ship building unit is in Finland, with the pair of Kvaerner Masa-Yards, in Turku and Helsinki, as well as Aker Finnyards. Kvaerner Masa- Yards needs no introduction, as the company is a prolific builder of some of the world's most outstanding cruise ships, and has been profiled in these pages on many occasions. The company recently signed a $329 million deal with Color Line AS, the largest ferry operator in Norway, for the construction of a 74,600-gt, 2,800-passenger cruise ferry.

(224 x 35 m) ship is scheduled for delivery in December 2004, and was a muchneeded boost for the yard. While Kjelstad admits that the cruise market is a bit depressed at the moment, he is quick to remind that a cruise ship has not been ordered in about 18 months — since September 11, 2 0 0 1— which could indicate that once ordering resumes, it could do so in earnest.

Kjelstad said the there are no firm acquisition offers on the table now, but if the company were to expand again, it would possibly cast its eyes to the Far East, where it currently has no presence.

Home Field Advantage While the company is busy expanding around the globe, it is not forgetting its roots, and is in the midst of many yard improvement projects in Norway that are designed to enhance efficiency and output.

For example, an approximate $20 million is being invested in Langsten shipyard, primarily in the form of a new covered building facility, capable of accommodating two supply vessels inside and one for final outfitting. It is scheduled to be complete in June 2003. Langsten currently employs 420 and has a capacity up to 30,000 dwt.

The company is due any day to announce its plan for Tangen Werft, as it is working with local officials and unions to determine the future course of profitability. 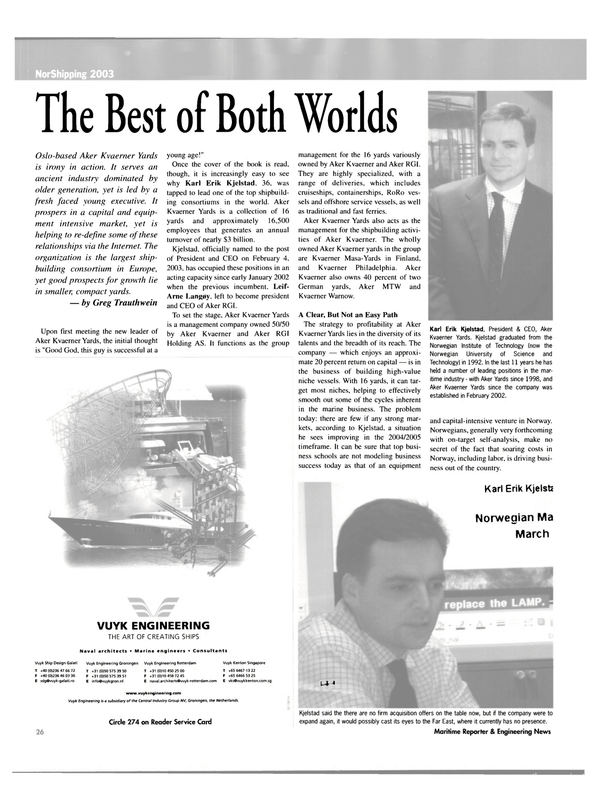 Read The Best of Both Worlds in Pdf, Flash or Html5 edition of May 2003 Maritime Reporter