Nor-Shipping 2003: Bigger Than Ever

When Nor-Shipping 2003 opens its doors on June 3 to the 19th shipping trade fair, nearly 1,400 exhibitors with close to 6,000 individuals representing more than 30 nations, will dominate the large new exhibition and congress center in Lillestr0m, which is just outside the city center The predecessor to the Nor-Shipping trade fair - an exhibition called Dekk og D0rk (Deck and Engine Room) — was held for the first time in the beginning of the 1960's, organized by Norwegian Industrial Fairs (now Norway Trade Fairs) in cooperation with the trade magazine, Skip. The first two exhibitions were entirely national, focusing more on the Norwegian sailor and his work place onboard rather than the international market.

The international potential for a Norwegian shipping exhibition was recognized by a Norwegian ship owner and magazine publisher, Per Selvig. He contacted then-Secretary General of Norwegian Industrial Fairs, Edv.

Mowinckel-Larsen, suggesting a broader and more international focus for the next maritime exhibition, organized with the support of Selvig's magazine Norwegian Shipping News. Before the opening in Oslo in May 1965, a new name for the event was launched — The First International Shipping Exhibition.

Due to the slumping maritime markets towards the end of the 1960s, the next exhibition did not take place until the end of May 1968, and then again in 1971, when the name "Nor-Shipping" was used for the first time. From then on, Nor-Shipping has been a bi-annual event, organizing the 19th fair in June this year.

A significant change of course took place at the fair in the early 1980's, when the purely technical exhibition was transformed to an event covering also the economic and financing aspects of the shipping industry, in short, Nor- Shipping had found the format, which is its guideline even today. 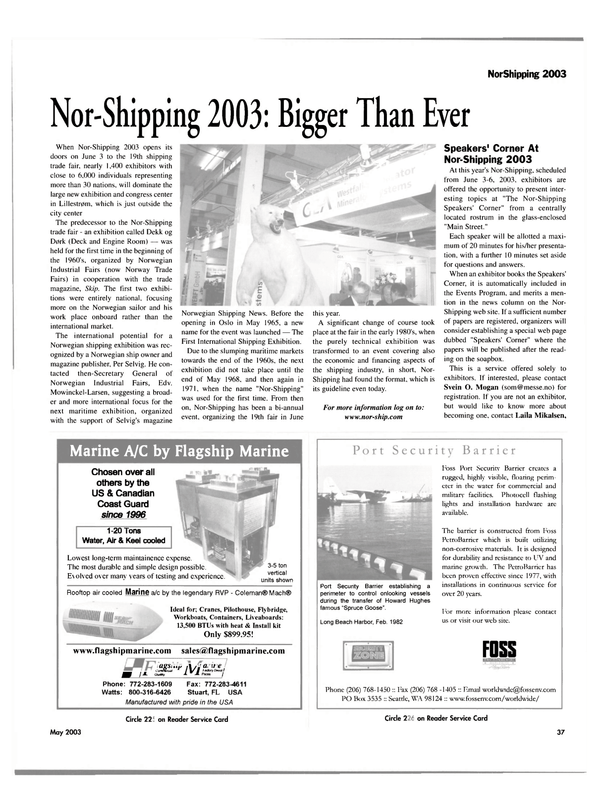 Read Nor-Shipping 2003: Bigger Than Ever in Pdf, Flash or Html5 edition of May 2003 Maritime Reporter