MAN 15&W Diesel Aktiengesellschaft, Germany Today, about 97 percent of the 90,000 ships of 100 gt and above in the International merchant fleet are propelled by large-bore, highly charged diesel engines. In the past couple of years, the discussion about alternative forms of propulsion increased, especially on the subject of gas turbines and hydrogen fuel cells (FC).

Ships need a propulsion system that can provide reliable transportation from point A to point B within an acceptable period of time - with maximum cargo load, at competitive capital costs, operation costs and maintenance costs - with minimum pollutant emissions.

Immature Fuel Cells Of the optional ship propulsion systems known today, the fuel cell is the least mature one. On the other hand, fuel cells currently enjoy great public and political focus and are often hailed as the energy conversion technology for the future, mainly due to the promising environmental properties when using hydrogen as fuel.

Because of lack of hydrogen, most FC demonstration plants use methanol in connection with so-called reformers, which transform methanol chemically into hydrogen, which means a reduction of the efficiency, and a production of C 0 2 and NOx. Therefore the ideal solution would be a hydrogen infrastructure, which would allow direct use of hydrogen in order to achieve maximum efficiency and zero pollutant emission. Such an infrastructure is missing today and even in the foreseeable future.

In shipping, use of both hydrogen and methanol as fuel is more or less ruled out, at least with today's storage technologies. In addition to the missing infrastructure and storage to support such fuel types, they do not have the same power density as diesel fuels. Therefore ships would need a much larger tankage volume to cover the same distance as with diesel fuels. In this case, the ships would transport fuel, not cargo.

If the 100,000-dwt shuttle tanker was driven by a future (hypothetical) FC system based on gaseous hydrogen - assuming the same propulsion efficiency as with the current diesel-based power plant - it would require huge fuel tanks reducing the 108,000 cu. m.

Perhaps the most uncertain point about the applicability of FC technology is the cost factor. The processes of mass production are still unknown, and many of the presently required materials are still very expensive.

In terms of costs per kW. fuel cells currently are 10 to 20 times more expensive than diesel engine plants.

Even if, in future, there was a complete hydrogen infrastructure available on this planet, diesel engines could burn hydrogen with high efficiencies. This is one of the results of a five-year theoretical and experimental study, which MAN B&W Diesel conducted together with the University of Munich a few years ago.

The Future Belongs to Diesel Engines The proven technologies for marine diesel propulsion suggest that alternative technologies will not challenge the reign of traditional propulsive power production by diesel engines onboard ships. The alternative technologies might find a niche, with gas turbines rather close and FC as GenSets in submarines. Even if a new form of propulsion was to beat diesel engines in efficiency there would still remain the long way to mass production.

Main diesel engines in the multi-MW output range will not disappear from the market, especially as long as low-priced, low-quality heavy fuel oils are allowed to be burned in them. However, diesel technology has to be constantly cared for and upgraded by the engine industry, in particular with respect to noise and exhaust gas emissions. 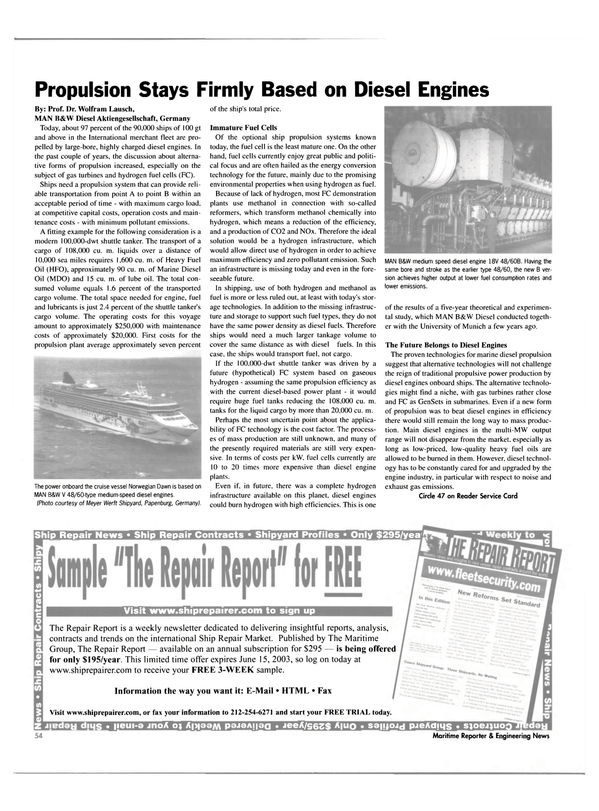 Read Propulsion Stays Firmly Based on Diesel Engines in Pdf, Flash or Html5 edition of May 2003 Maritime Reporter