Bunkering is an industry in its own right, but one that is squeezed by events, which happen in the much bigger industries that we are the bridge between. We are vital to both the energy and shipping markets, and at the mercy of both. When the energy markets move, our prices move. When crude availability is tight, bunkers suffer. When air quality laws force refineries to change their practices, bunkers suffer. And when shipping suffers an accident, bunkers can also suffer.

Until recently, bunkering was at the mercy of regulators and regulations, which were not necessarily aimed at it.

Fuel oil has been very much in the European news over the last few months, simply because a lot of it was spilled from the stricken tanker Prestige, off north Spain. The vessel fell apart in heavy seas, and the subsequent pollution from the cargo of fuel oil made, and still makes, big headlines in France and Spain. Even the word "fuel" has become part of the vocabulary of the man in the street. To them, it means a nasty toxic black substance, which pollutes their beaches.

The Prestige accident was probably not directly a result of anything to do with bunkering, although ABS has suggested that the use of the ship as a bunker storage vessel caused structural damage, but it has had major repercussions for bunkering. Firstly, it has focused public attention on the large quantities of bunker fuel, which are shipped past their coast. And they don't like that. We in bunkering know that there will be more and more fuel moving, because the patterns of supply and demand are changing. As refineries in the U.S. and Asia upgrade, they have less and less residual fuel, which means less local bunkers. Russia still has some way to go on refinery upgrades, and a big desire to sell bunkers. Because of this, the oil comes from there to where it is needed. But France and Spain have been quick to identify tankers carrying such fuel and chase them offshore, outside their 200-mile EEZs. This was an action of debatable legality, but which now looks likely to be condoned, and become enshrined in law, as the major EU coastal states are now discussing with IMO the implementation of special areas which would force tankers to route themselves a minimum of 100 miles out to sea from the French and Spanish coasts. INTERTANKO has cautiously welcomed these moves, and from the bunker point of view, if they prevent more fuel spilling on beaches, it can only be a good thing.

The net effect on the bunker business will be negligible, simply a longer distance for tankers to travel, but tanker ton-miles are cheap, even today, so it is unlikely to have a major effect on bunker prices. Shipowners may even welcome the move, as it means more freight for them.

Potentially more serious for the bunker business were the initial proposals by the European Commission to phase out all single hull tankers almost immediately.

The proposal, as drafted, included all tankers over 600 dwt, which would have effectively hit a large portion of the European bunker barge fleet. Some, but if not all, EU states have already banned single hull tankers carrying heavy oil from their ports, but have sensibly made local exception for smaller ships, allowing bunkering to continue unimpeded.

IB IA lobbied the European Commission, and alerted the press to the fact that the EC proposal for accelerated phasing out of small single-hull tankers was likely to have an unnecessary and severe effect on bunkering in Europe. It was a classic case of legislators reacting to public opinion, but not necessarily being fully aware of the consequences of their actions. Fortunately, the European system has many checks and balances.

The Commission did listen to IBIA, and recently announced that it was modifying is proposals to allow smaller single hull tankers up to 5,000 dwt to continue trading until 2008. And fortunately again, the EU presidency is currently in the hands of Greece, which is the world's leading shipping nation.

Action by the Greek government has led to moderation of the original proposals, and the latest news is that the whole question of new phase-out limits for single hull tanker is returning to IMO.

Bunkers are not really affected, as their transportation around Europe will have to be in double hulls anyway, simply because of the immediate ban on single hulls carrying heavy and dirty cargoes.

The European Commission is still actively trying to address public concerns about safe and clean shipping, and is under intense pressure from some heads of state, such as France's president Chirac, to impose new rules on liability and also to enforce criminal sanctions for oil spills. On March 5, 2003, the EC presented a proposed EU Directive to be considered by the EU Council of Ministers and the European Parliament, under which "criminal sanctions will be applicable to any person who has been found to have caused or contributed to illegal pollution intentionally or by means of gross negligence", including the master, the owner, the operator, the charterer and/or the classification society of a ship/barge. The draft directive does not detail what specific penalties could be imposed, but it does state that they would have to include custodial sentences in order to serve as effective deterrents.

The proposal as it has been made appears to be a regional amendment MARPOL, and is also based on the assumption that every oil spill must be the result of negligence. It could have serious consequences for bunker suppliers, and for ships' crews taking bunkers.

As Chairman of IBIA I would like to underline the need for proper investigation and impact analysis before new regulations are introduced. What is needed now is efficient implementation and enforcement of the rules adopted in the IMO. I would also like to emphasize the need for international regulation of the tanker and bunker industry, and I am worried that other regions are now considering taking their own measures as a reaction to the EU's regional initiatives.

The EU Prestige proposals alone would not destabilize oil supplies, and in the main, the bunker industry can live with them. But if other regions follow suit, a raft of measures all over the world, taken in combination, have the potential, in addition to creating confusion, instability and lack of uniform implementation, to restrict significantly tanker availability and in turn to disrupt oil supplies.

No one wants that, most especially the bunker industry, which is a vital part of the energy supply chain on one hand, and everyone else's supply chains on the other. So IBIA will continue to lobby for common sense, for pragmatic responses to accidents, and for IMO to be the governing body for world shipping, providing global solutions.

IBIA has learn a lot about how the EU as a whole has worked throughout the last year, first as it reacted to EC regional proposals for sulphur limits, and then as it saw how Prestige proposals would have affected bunker barges, and moved successfully to have the proposals changed. Our voice as a bunker industry has been heard, and that positive engagement, with regulators and with other industry bodies, is good for all of us. I think we will have much to do in coming years. 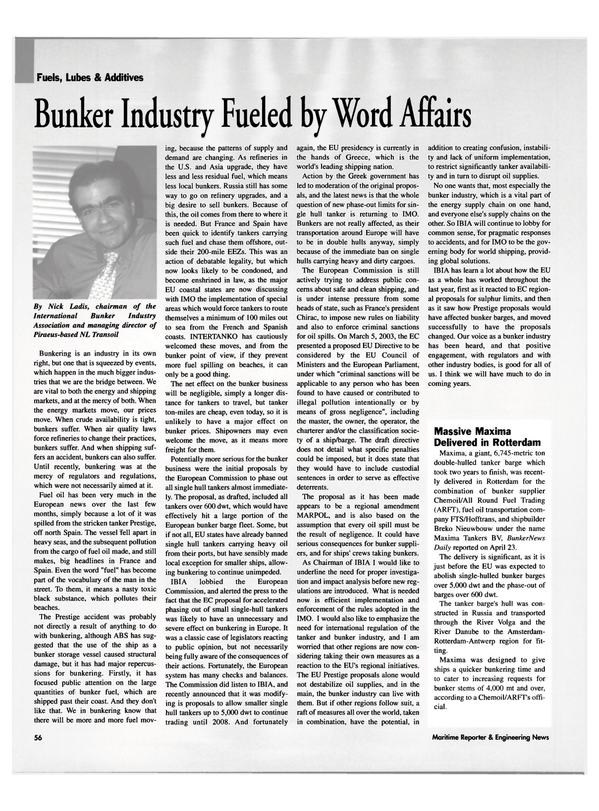