"I'm Looking Through You"

The problem is that many of the participants in maritime activities value the current opaqueness of most maritime transactions, generally for legitimate commercial reasons. If your competitor knows early-on what you are doing, he or she can more successfully compete against you. One of the problems with providing information to the government is that the government sometimes cannot (or will not) keep the information confidential. Thus, there is a natural tension between the government's desire for detailed information and the commercial sector's preference for opaqueness.

The U.S. drive for transparency is being waged on several fronts. It involves cargo, ships, and persons on the ships.

Cargo Under the Advance Vessel Cargo Declaration regulation (better known as the 24-hour rule), carriers are required to notify U.S. Customs at least 24 hours prior to loading cargo in a foreign port if the cargo is to be carried to the United States. Among the information that must be provided to Customs are: the numbers and quantities of each packing unit; the foreign port at which the cargo was loaded; a precise description of the cargo (such as the Harmonized Tariff Schedule number to the six-digit level) and the weight thereof; the shipper's complete name and address; the consignee's complete name and address; the internationally recognized hazardous material code (if applicable); the container number; and the seal number.

Most of that information is required by law to be made available to the public upon request. An importer or consignee may request confidential treatment of its name and address, and the name and address of the shipper. Until the 24-hour rule came into effect on December 2, 2002, the cargo declaration information was more limited and was not presented to Customs until the cargo actually arrived in the United States ("landed").

Expanding the information requirements and having it presented much earlier in the importation process made that information more commercially valuable.

Reacting to numerous protests that the 24-hour rule would result in the compro- mise of commercially sensitive information, Customs issued a proposal to make it easier for consignees and importers to seek and obtain confidential treatment of some of the information. In the meantime, it issued a fact sheet reminding consignees and importers how to obtain confidential treatment of certain information under the current regulation.

Ship Prior to the events of September 11, 2001, the U.S. Coast Guard required ships coming to the United States to submit basic information regarding the ship 24 hours before arrival.

Immediately after the terrorist attacks, the information requirement was significantly expanded and the information was required to be submitted at least 96 hours prior to arrival.

Masters are now required to submit detailed information relating to the ship, the ports recently visited, the ports in the United States to be visited (including the names of the specific receiving facility), the name and telephone number of a 24-hour point of contact, a general description of the cargo and specific details regarding certain dangerous cargo, detailed information regarding all persons on board, the operational condition of all navigational equipment required to be carried, and information regarding the ship's safety management system.

The information requirement is so sufficiently demanding that the Coast Guard estimates it will cost ship owners and operators as a whole approximately $6.7 million annually to gather and provide the information on a timely basis.

Crew and Other Persons on Board Almost the only information not required to be reported to the U.S.

Coast Guard concerning persons on vessels arriving in U.S. ports is the maiden name of the person's mother.

The individual's full name, date of birth, nationality, passport number (mariner document number is acceptable if the individual is a crewmember), position or duties on the ship (if the individual is a crewmember), and the port or place where the individual embarked must all be reported to the Coast Guard in the advance notice of arrival. The Coast Guard shares this personnel information with the Immigration Service and with the intelligence community. If persons reported to be on board raise suspicion, the Coast Guard and possibly other agencies conduct a more detailed examination when the ship enters U.S. waters. If, during a routine boarding, discrepancies are found between persons reported to be aboard and persons actually on board, the ship will be delayed until the matter is fully resolved.

A ship with a master and chief engineer of Iraqi nationality was considered to present an unacceptable security threat to the United States.

International Efforts The United States attempted to get approval through the International Maritime Organization (IMO) for a requirement that flag administrations gather information regarding the true and beneficial owners of ships registered in that country, rather than just the owner of record. The concern was that terrorist organizations, such as al Qaeda, might own ships through cover organizations.

The ships could then be used for a variety of illegitimate purposes, including smuggling weapons and terrorists in and out of countries and carrying weapons of mass destruction into vital ports for detonation. This particular effort to enhance transparency on the international level was not adopted, but other efforts have succeeded.

A new international requirement was adopted for flag administrations to prepare and issue Continuous Synopsis Records for each ship in its registry that engages in international trade. The Record will contain, among other things, the name of the flag state; the date of registration; the ship's identification number and name; the port of registration; the names and addresses of the registered owners, registered bareboat charterers, and operating company; and the name of the classification society for the ship. The Record is to be updated regularly so that it provides a continuous history of the ownership and operation of the ship. While not as extensive as the United States originally wanted, the Continuous Synopsis Record will provide a greatly expanded database for port state control officials once it comes into effect on July 1, 2004.

Ships will also be required to permanently mark their identification number in a visible place on the hull and on a major bulkhead. This will provide yet another means for coastal states and port states to readily identify vessels in their vicinity. It should also make it easier to track down vessels that violate pollution or other laws. At the request of the United States, the dates by which ships are to install and operate automatic identification system (AIS) equipment have been advanced. The technology was originally developed for navigational use, but during the re-evaluation of security issues following the terrorist attacks it was realized that AIS could be used to better identify ships as they came into range of shore installations. Efforts are now being made to develop a version of AIS that utilizes satellite communications, so that ships can be tracked worldwide, not just in coastal waters (using current AIS technology).

Summary While it is unclear how successful these U.S. efforts have been in identifying and rooting out terrorists, it is very clear that the information demands placed on the maritime and related industries are high. As noted above, the cost of just the expanded advance notice of arrival requirement is almost $7 million per year, according to government estimates. The cost in loss of a competitive edge has not been computed, and is probably incalculable, but may prove to be quite high. On the other hand, if the loss of transparency leads terrorists to forego use of the maritime sector as an avenue for their activities, the high price may be worth it. Only time will tell. 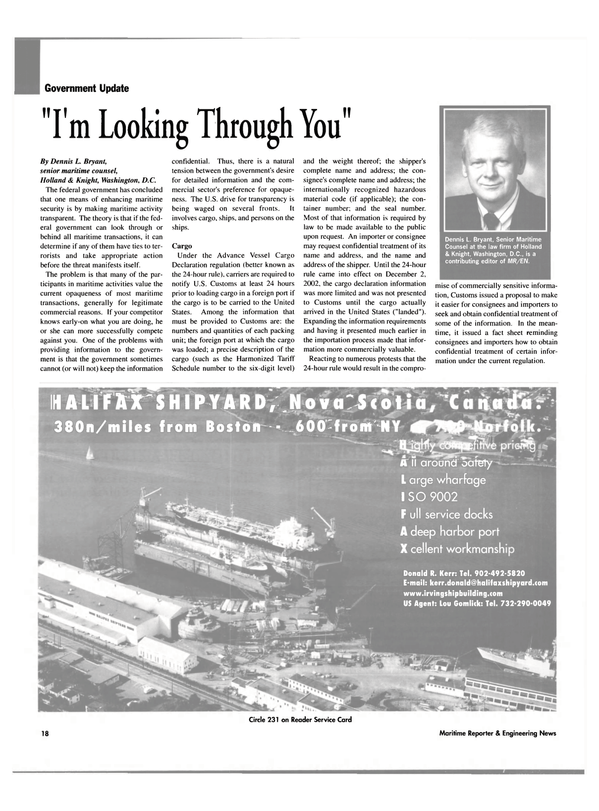 Read "I'm Looking Through You" in Pdf, Flash or Html5 edition of May 2003 Maritime Reporter