With tall, slab sides encasing a multideck configuration, the pure car/truck carrier (PCTC) has a characteristically high windage factor, influencing course- keeping, maneuvering and fuel usage. A new series of PCTCs at the top end of the capacity range denotes a particular endeavor by Japanese shipbuilders to raise design performance through close attention to the aerodynamic properties of such vessels. Recently delivered into the long-haul vehicle trade patterns maintained by Mitsui OSK Lines (MOL), the 57.000-gt Courageous Ace embodies a refined form intended to lessen wind resistance and enhance fuel efficiency. Courageous Ace can load 6.400 automobiles of 'standard' size throughout its 13 cargo decks, and is the first of a trio from Minami Nippon Shipbuilding's Oita yard. Another three vessels of the series are in hand at Shin Kurushima Dockyard.

The design has been developed in conjunction with Universal Shipbuilding Corp., and is claimed to yield operating benefits, such as a higher service speed for a given power, while lessening the environmental impact through reduced emissions of carbon dioxide, and oxides of nitrogen (NOx) and sulfur (SOx) per unit load.

MOL's corporate principles emphasize "safe operation and environmental protection," based on the company's environmental management system, which has led to ISO 14001 certification.

The philosophy permeates the newbuild program, and the consideration given to the energy implications of aerodynamic form in Courageous Ace sets the pattern for future investments in vehicle carriers.

Since the cargo decks in a PCTC extend right forward, encompassing the entire length of the hull, the vessel's elevated bow has been aerodynamically rounded and beveled along the bow line to help reduce pressure from head winds.

In addition, wind channels have been created along the sides of the vessel at the top of the uppermost garage deck, so as to help counter windage and better maintain a straight course. Test results pointed to an approximate 20 percent reduction in aerodynamic pressure at the bow in winds of 15-m /sec., thereby promising an improvement of about four-percent in fuel efficiency. By reducing leeway, the design is expected to raise fuel efficiency by approximately six percent, averaging all wind directions at 15-rrt/sec. The combined effect of the design enhancements are said to offer a speed increase, relative to power, of up to one knot, depending on wind direction.

Courageous Ace is also equipped with Propeller Boss Cap Fins (PBCF), a device developed by MOL to enhance propeller efficiency by four- to five-percent, with resulting gains in efficiency.

In keeping with the needs of the trade, MOL's latest fleet entrant has the flexibility to carry so-called 'high-and-heavy' cargo, by virtue of the adoption of two, hoistable car decks. The arrangements enable construction equipment, agricultural vehicles, railcars, buses and other than autos to be loaded on Nos 5 and 7 decks, with the associated moveable decks in the stowed position. Capacity intake using the full height of these two decks equates to 182 dump trucks of 27 tons, plus 5,300 autos of standard unit size 15 x 5 ft. (4.5 x 1.7-m) accommodated elsewhere throughout the ship on the fixed car decks. 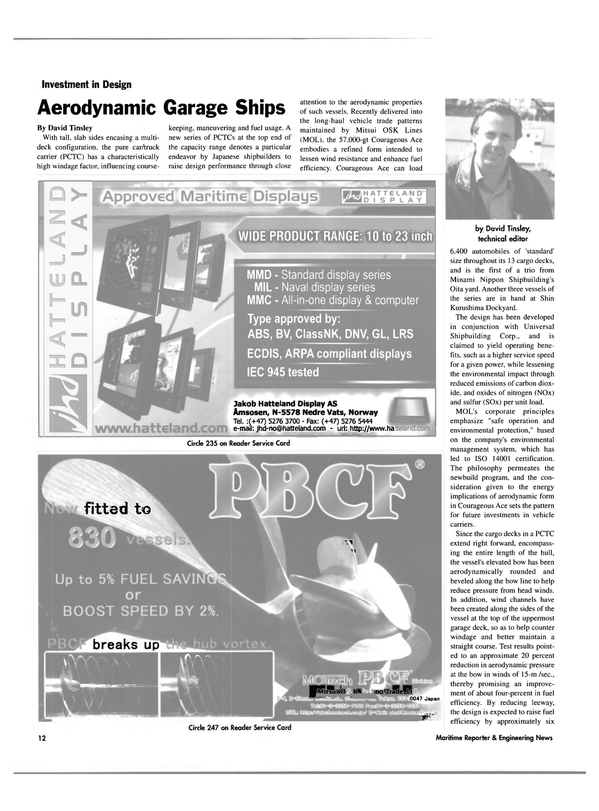