Furthering its commitment to its U.S.- flag cruise ship initiative, Norwegian Cruise Line (NCL) has purchased the S/S United States, one of the country's most venerable ships built in the glory days of trans-Atlantic sea travel. NCL will convert the vessel to a state-of-the art, modern cruise ship and add it to NCL's planned U.S. flagged fleet.

Widely considered to be the greatest superliner ever built in this country, the S/S United States was engineered to be faster, safer and more technologically advanced than anything else afloat when it was christened. To this day, its Atlantic crossing record has never been matched and it remains the holder of the fabled Blue Riband.

Knowing that S/S United States faced an uncertain future, NCL moved swiftly to purchase the vessel. NCL is now evaluating options for use of the ship under U.S. flag and determining the extent of renovations needed to convert it to a state-of-the-art, modern cruise ship. The ship is expected to offer mainland U.S.

itineraries where cruise products are not currently available. The refurbishment of the hull and superstructure will be done at U.S. shipyards with the outfitting completed overseas. Conversions such as this are not foreign to NCL, as the company transformed the North Atlantic liner, S/S France, into cruising's first Caribbean megaship, S/S Norway.

investment in Project America, generating hundreds of millions of dollars in economic activity and tax receipts, and creating more than 20,000 U.S. jobs.

On its maiden voyage, S/S United States set an unbroken record by crossing the North Atlantic Ocean in three days, 10 hours and 42 minutes. Its service speed exceeded 35 knots and the vessel was rumored to be capable of 50 knots. Designed by William Francis Gibbs, the ship is the longest passenger vessel ever built in the United States. At 991 ft., (302 m) the vessel, which was constructed at what was then known as Newport News Shipbuilding, was considered an engineering marvel at the time, and held a near perfect operating schedule.

NCL also announced its intentions to purchase another classic — Americanbuilt ship — S/S Independence. Until October 2001, the vessel was sailing in the Hawaii trade until it was a victim of its owner's (AMCV'S) post-September 11th bankruptcy. NCL purchased the vessel at federal auction from the U.S.

Maritime Administration saving her from almost certain scrapping. The potential addition of the S/S Independence as a fifth vessel in NCL's U.S. flag operation is being evaluated 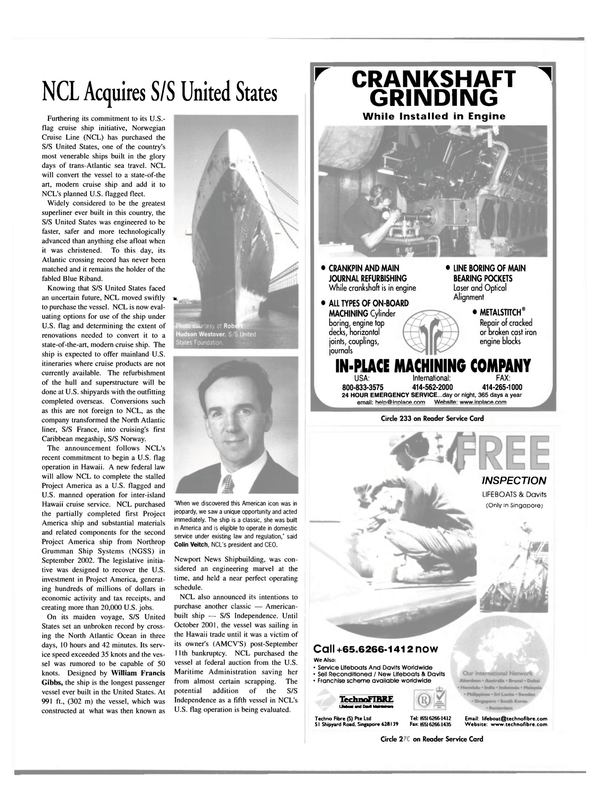