Cummins-Powered Pusher Tug Is First Of Three For Archway

The recently delivered Jeanne Marie is the first of three sister vessels to be built for Archway Fleeting and Harbor Services of St. Louis, Mo., by Marine Builders, Clarksville, Ind. Powered by a matched pair of Cummins KT- 2300-M diesels generating a combined 1,400 bhp at 1,800 rpm, the Jeanne Marie is the first newly constructed boat powered by KT- 2300-M's on the nation's inland waterways.

"There are times when we need that horsepower to pivot quickly or fight the current when the river is at flood stage. It takes all day for a small boat with only 700 bhp or so to push barges upriver for a single switching operation on days like that," Mr. Houlihan said.

Two knees rising 8 feet above the deck are bolted to the ship's understructure for added strength and stability. A Racor 800B-5 recycle blending system helps save fuel by centrifuging crankcase oil after changes and recirculating the 35 to 40 gallons into the fuel system.

The steel-hulled pushboat will be used in Archway's switching operations based at Reidy Terminal in St. Louis. Archway now operates four boats between mile 156.4 and Lock No. 26.

"We project an annual fuel savings of $80,000 per boat using the Cummins engine, which comes out to nearly a quarter of a million dollars savings in fuel alone when all three boats are working.

That's a figure that's sure to catch your eye." Archway owner Eugene Slay authorized purchase of the engines from Cummins Kentuckiana of Louisville after consultation with Dave Evancyzk of Marine Builders; Pete Fanchi, a consultant; St. Louis port engineer Dennis Crank; and representatives of the major marine engine manufacturers.

Mr. Houlihan estimates the Jeanne Marine will work more than 20,000 hours before an overhaul will be needed. Workload capability is part of the reason behind the surprising durability expectations. The engines will often operate below their maximum capacity, reducing wear and extending engine life.

Reliability and minimum downtime are vital to Archway. Their contract with Wisconsin Barge Company, a major bulk transporter on the Mississippi, requires that boats be available on a 24- hour, 365-day basis.

To further protect against lost time due to maintenance work, a service agreement has been signed with the local Cummins Marine distributor, Cummins Missouri, Inc., for parts and service requests on a priority basis.

The addition of the Jeanne Marine, named after Mr. Slay's eldest daughter, and two sister boats is a major move for Archway, doubling the size of its fleet. 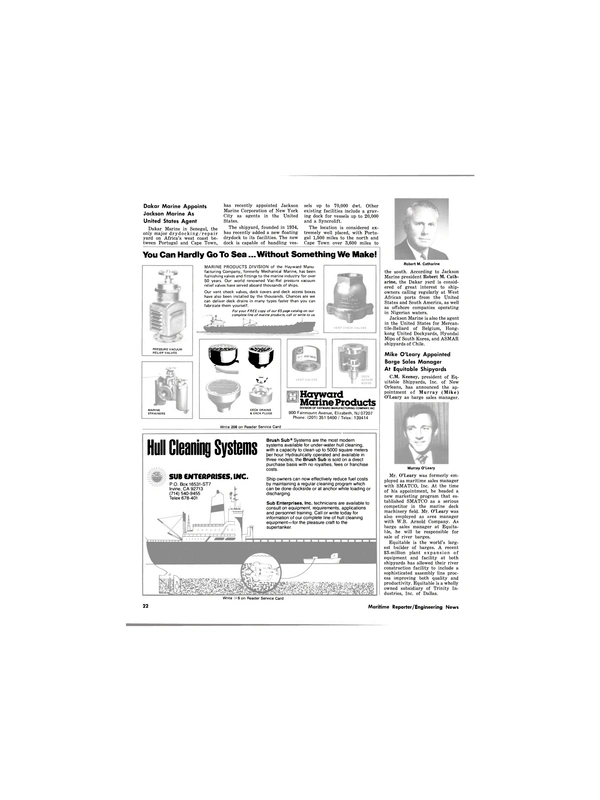 Read Cummins-Powered Pusher Tug Is First Of Three For Archway in Pdf, Flash or Html5 edition of November 1980 Maritime Reporter